Transcarpathian dialect: what it’s like and why it is important to save it

A research on things seemingly important but little known

Every visitor to Transcarpathia must have had an occasion when they could not clearly understand what the locals were speaking about. And this may happen in any part of Ukraine’s westernmost region, and not only in the habitats of, say, Romanians or Hungarians where their native language is spoken.

We mean events when you seem to hear Ukrainian language, stresses and endings are familiar to you, but the words are partly obscure.

However surprising it may seem, but such situations happen not only to tourists but with locals, too, when Transcarpathians from one part of the region arrive to another. For instance, Uzhhorodians come to Irshava area or Rakhivians come to the neighboring Tiachiv area. It is especially felt in the countryside among residents of Transcarpathian areas distant from one another.

It is not strange that sharp debates are held around this “language issue” not just for some years but for centuries, mostly political and, alas, endless and pointless usually. So we will not go into their details, for they are very manipulative and hybrid in their essence.

For we would hate our publication to become a part of those debates. Moreover, we always strive to bring more clarity to the situation.

Therefore, as we were studying the subject, we addresses to experts in linguistics, and, what is important, to the local ones. Namely, to Pavlo Chuchka and Petro Midianka. They are extremely precise in their considerations, on the one hand and their opinions are very fine and academically delicate, on the other hand. For, as Petro Midianka stresses, quoting Ivan Franko, “whether it is a dialect or an independent language, the issue is the yeastiest in the world”.

When and how the Transcarpathian dialect was born

Transcarpathian dialect (from the Greek, meaning “a parlance, speaking”) or Transcarpathian subdialect is one of the most archaic dialects of the Ukrainian language. It was formed historically, as a result of the territory of the modern Transcarpathia having been on the boundaries of borders and a part of various states. So every governance and state contributed to the dialect with borrowings from corresponding stately literary languages. The greatest number of loan words in the Transcarpathian languageis Hungarian by origin and no wonder, for during the last few centuries the modern Transcarpathia area was exactly a part of Hungarian stately formations, – Petro Midianka explains. He is a 60-year-old winner of Shevchenko’s Award, Ukraine’s most prestigious literary one. He himself comes from the village of Shirokiy Luh (meaning “Wide Meadow”) in Tiachiv area. He has been working as a teacher of Ukrainian language and literature in the secondary school of Tysalovo. 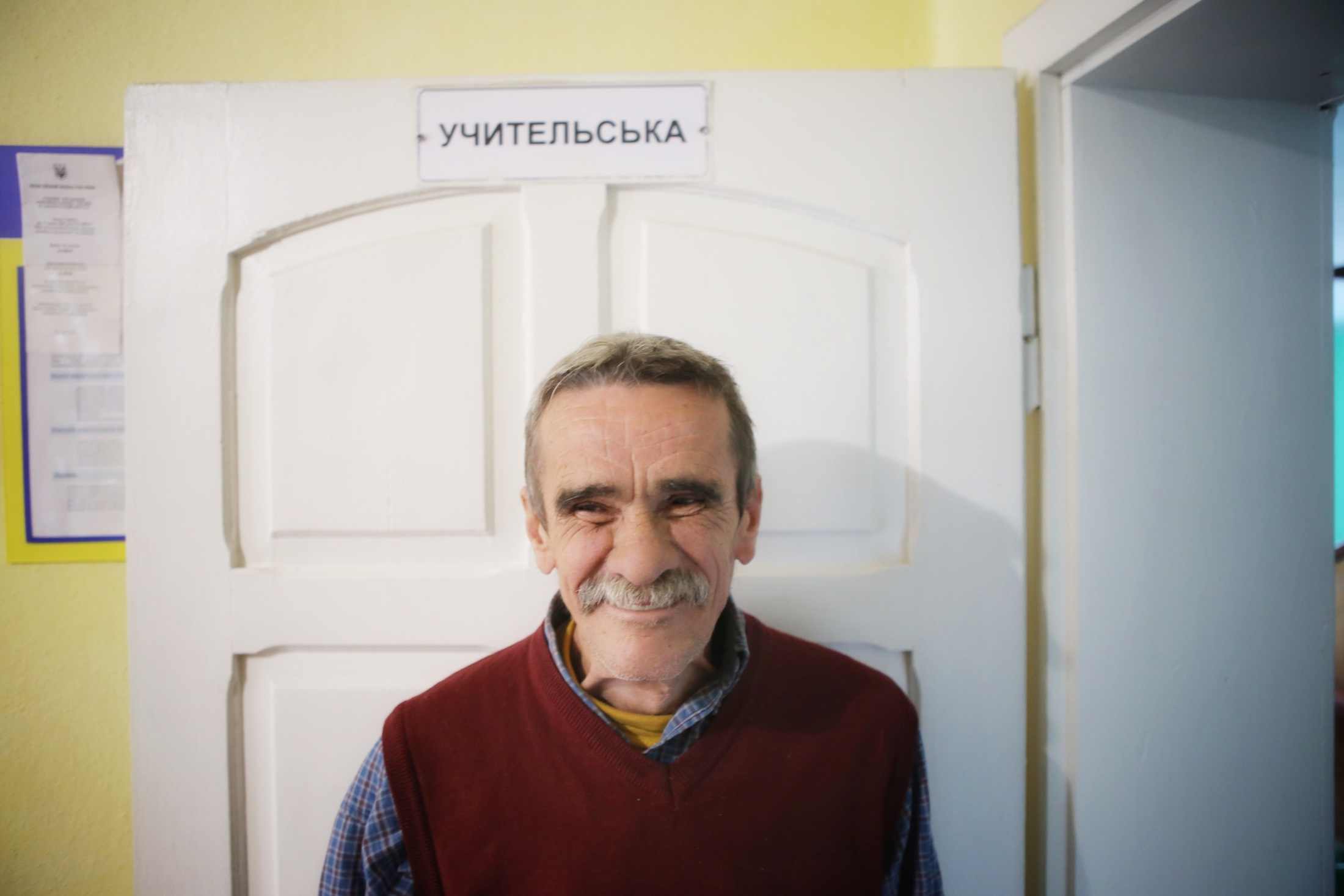 – The dialect that we now call Transcarpathian, was formed in the 18-th century, as all of these provincial phrases were fixed in records and modern literary language appeared in the whole world. For instance, my library includes the book “Rusyns’ business literacy of the 18th century”, and it’s got all that stuff.

– Answering briefly to the question “What is Transcarpathian dialect?”, I keep saying that nothing special happened to Ukrainian language in this case. The thing is that it has always been a part of a cross-pollination process, being at a borderline, with neighboring languages. A peculiar lingual diffusion,- adds the linguist and our second expert in this conversation, Pavlo Chuchka. Together with his father, also named Pavlo Chuchka, they had long studied Ukrainian and its development in the Carpathian region, and not only in that of Ukraine. 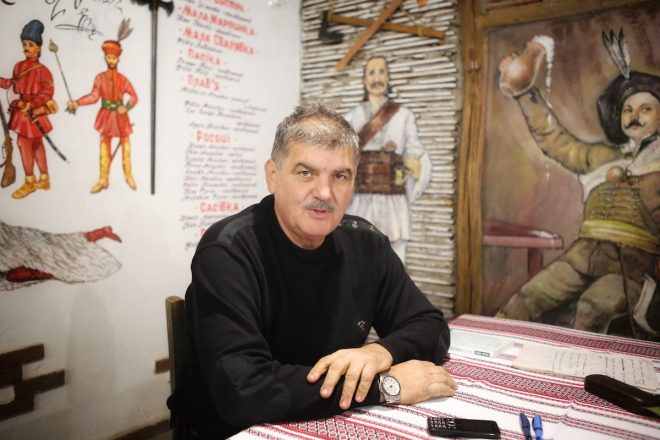 By Petro Midianka’s words, the Transcarpathian dialect has a Slav and Ukrainian linguistic basis but it is not homogeneous and is divided into layers, i.e. sub dialects:

– Every small village has got its own word, as a Ukrainian proverb goes. So in the case of Transcarpathia we may speak not of a mono-dialect, when it’s spoken specifically the same everywhere, but of a great number of varieties of this dialect – those of Borzhava, Uzh, Turianska valley and so on.

As Petro Midianka explains further, supported and complimented by Pavlo Chuchka, Transcarpathian sub-dialects appeared over the river valleys inhabited by local people. Due to the natural barriers, first of all, mountains, they communicated with one another only too little. That was how certain lexical, phonetic and morphological peculiarities singled out.

– If you take a look at the hydrographical map of Transcarpathia, it will remind you of a comb: virtually along the region the Tysa flows, and down southwards to the Hungarian side the Teresva, the Tereblia, the Rika, the Latorytsia and the Uzh flow. And along with them go Rusyn or Rusnak, or Ukrainian regional colloquial language, – Pavlo Chuchka describes the map of Transcarpathian dialects.

The way the Transcarpathian dialect changes through time

Depending on the area in Transcarpathia, Petro Midianka proceeds, either Slovakian or Czech or Hungarian, Romanian or German loans prevail all the more, and some of them already start disappearing:

– It is especially noticeable with Hungarian verbs used by elderly people in local sub-dialects as Hungarian loans. For example, fáradtság, spoken as “farachag” and meaning “weariness, tiredness”. Respectively, in the dialect “faradlovaty” means “to labor hard”. Or the dialectal “halasyty”, meaning to go fishing, deriving from the Hungarian words hal and halászik, translated as “fish”.

– In the valley of the river Uzh, the sub-dialect was formed through replenishment of the Ukrainian lingual field with Slovak borrowings, and here the percentage is much higher than, say, in the valley of the river Borzhava. There the dialect has its phonetic and lexical niche. In the upstream land of the Tysa, where the Hutsuls dwell, the language is closest to the literary Ukrainian but is also replenished with Romanian loans from the neighbors (the state border goes along the Tysa in Rakhiv district – Editor), – Pavlo Chuchka stresses.

We asked Petro MIdianka to write down a sentence in the Transcarpathian dialect, so that it had loans from all the languages that replenish the dialect. Surely, the sentence sounds artificial but it is still interesting for comprehending the phenomenon itself:

Where, bryndza is the milled sheep cheese (from Romanian), friga is melted bryndza (from Romanian), “furt” means “always” (from Czech), “sherpeniov” – a pot, a plate (from Hungarian), firtaly – a quarter (from German).

And Pavlo Chuchka has prepared for us an improvised newscast in dialects from various areas of Transcarpathia.

Petro Midianka also turns our attention to another aspect of the Transcarpathian dialect: when learning it, attention is paid to the fact which words are borrowed and integrated into a certain literary basis. However, there is also a reverse process:

– Today we may talk of certain leveling of the primary dialect that once existed. Today it has become significantly literated – from mass-media, school, and literature. This very process of literation was most dynamic in the Soviet period, when the literation not only influenced the dialect but was totally Russifying it, – the Shevchenko Award winner stresses. 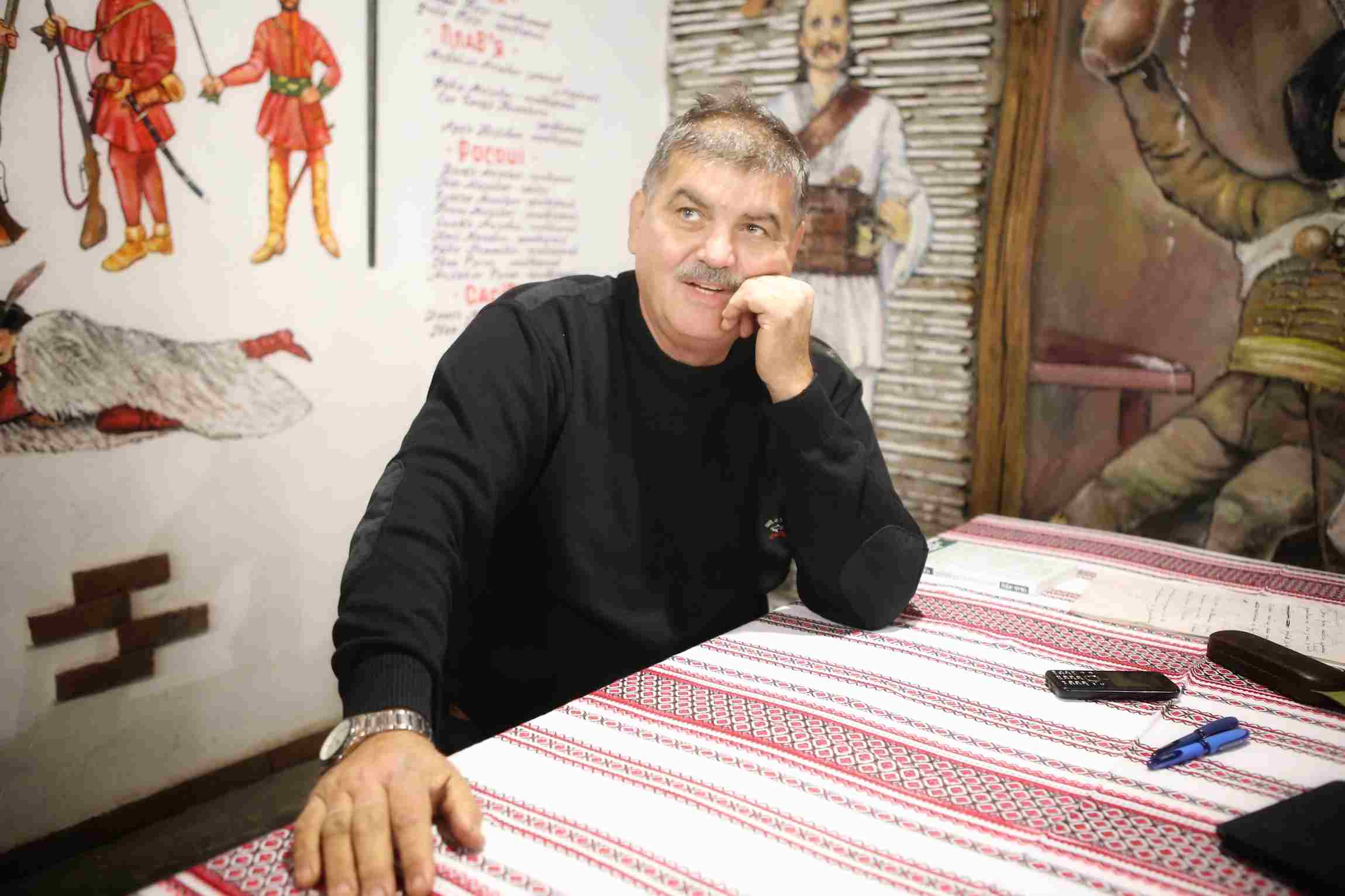 – At the same time, – Pavlo Chuchka adds, – the risk of Russifying the Transcarpathian dialect exists still now. Pavlo states that he can clearly see such efforts from certain politicized circles working on the subject:

– Unfortunately, today, there is little systematical approach to researching Transcarpathian sub-dialects. Just as there is little tendency to stick to certain conventionalism in the dialect, by avoiding explicitly foreign words, non-typical for the application area. First of all, it’s about Russian words that have never been in Ukrainian and other languages replenishing the Transcarpathian dialect. For instance, “kaniechna”, “pozhaluyasta” (certainly, please – from Russian). That is to say, I can see a systematic approach in other things: an effort to disroot from the Transcarpathian dialect elements of literary Ukrainian and substitute them with artificial non-typical lexemes.

Role and function of the Transcarpathian dialect

Petro MIdianka confessed to us: there was a certain time, as he was only beginning to write poetry, he was yoked with not just a dialect but even thinking in the dialect:

– I write in literary Ukrainian, according to all lexical, syntax and morphological standards, usinf loan words and archaic words. But as I was preparing to publishing my first collection of poetry, I was even advised to live for some time in Lviv and Ivano-Frankivsk, to get rid of thinking in the dialectisms, which was then felt in my first works. 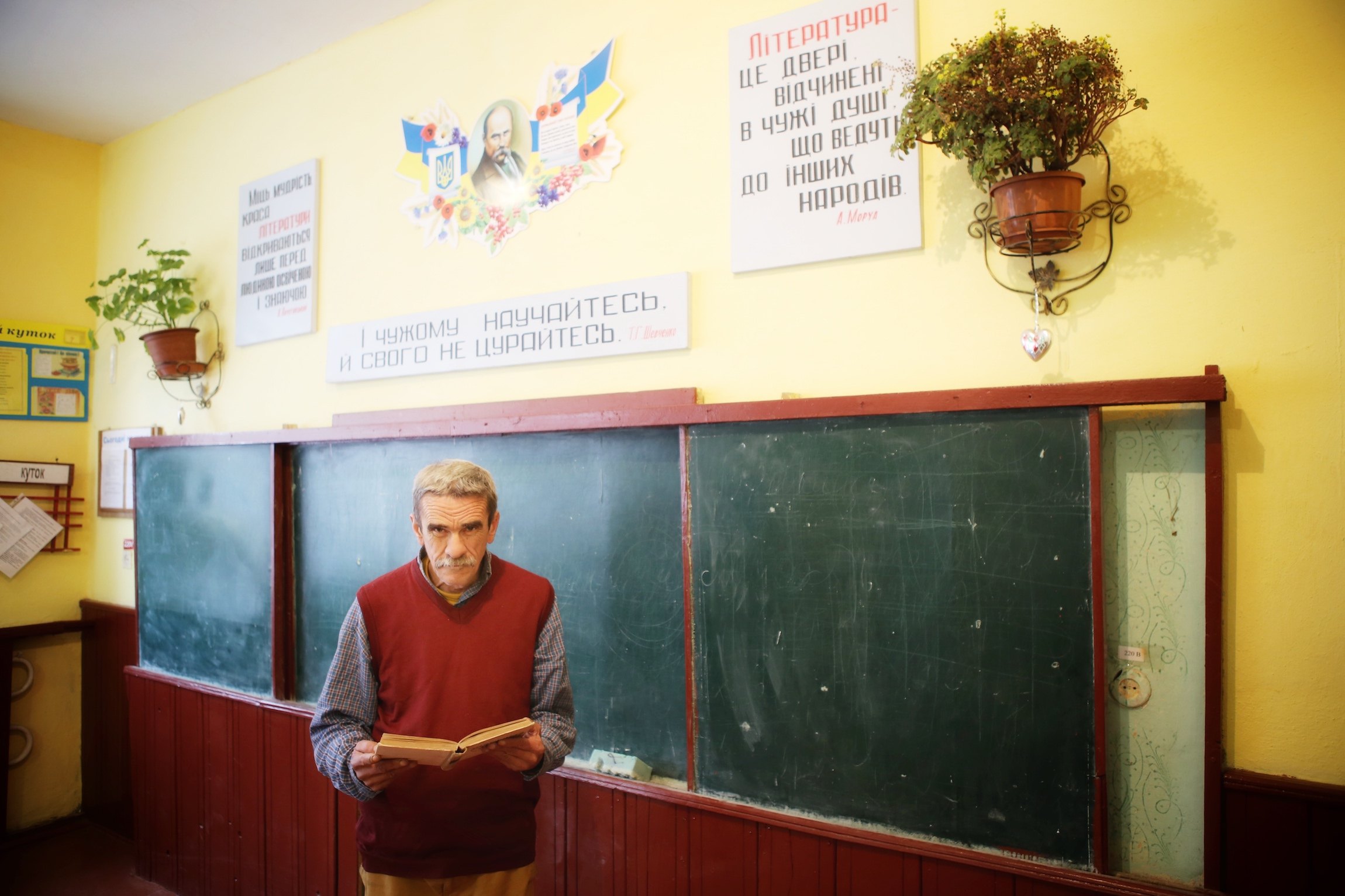 Despite that, Petro MIdianka insists on the key value of the dialect – it enriches any language:

– Considering that the central and middle-Dnieper dialects of Ukrainian are much Russified, Carpathian and Transcarpathian dialects are extremely important and useful for Ukrainian, since they enrich and replenish it, though not always in a simple and understandable way. This happens in my texts. That’s why dialects should be fostered and preserved, especially from artificial efforts to codify a dialect to the state of a literary language, for the purpose of exotics or others. This happens these days.

Pavlo Chuchka makes an accent on the fact that the Transcarpathian dialect is a part of the main touristic product in Transcarpathia, along with the mountains, gastronomy, thermal waters and so on; it’s another thing that people come here for.

– The dialect, like other Transcarpathian attractions, makes one travel to various parts of the region, since they are absolutely different, even by the sub-dialects. And to make up a complete vision of Transcarpathia and comprehend it in full, one has to go everywhere. This is true not only for tourists but for locals as well.

Definitely, the dialect also serves an identification function, both within the country and the region; for Transcarpathians may easily recognize among them, say, a person from Irshava area, Khust area or Rakhiv district.

And another bonus is, as our tutor from a language school says, it is much easier for Transcarpathians to study Hungarian, Slovakian and Romanian, for they will already know from the very first lessons a few dozens of words from all of those foreign languages.

Even if it seems to you that you have never heard a Transcarpathian sub-dialect, that’s not quite true. The dialect from Ukraine’s westernmost region sounds everywhere, most commonly – in music. In particular, it is used by musicians from the bands Rock-H, Vandor, Maryna & Co, Hudaki Village Band (who have already performed twice on Europe’s biggest festival, Sziget), Chalamada, TrystaVisim (ThreeHundredEight).

In April last year the whole country was amaze by the song “Bytanha”, performed by Alina Pash. She even sang it in Davos, presenting Ukraine.

Finally, our title – Varosh – is one of the most universal words in Transcarpathian dialect, borrowed from Hungarian but used throughout the whole region and not only in Hungarian habitats. We just added a letter “h” to the Hungarian word város (meaning a town, a city) and in this ways we created a unique title, spelled by everybody the way it sounds in the Transcarpathian dialect.

To sum up, we offer you to listen to a song similar to our title – “Se miy varosh” (That’s My Town), performed by the band Chalamada. In it, dialectisms are sound especially “tasty”, as interwoven into Ukrainian.