Separatism, Europe and smuggling: 3 fictions about Transcarpathia – easy to believe and hard to contradict

We tried to and here is the result

Ukraine’s westernmost region has made the top news in Ukrainian and world media quite often. The references have not been always positive. Frankly speaking, most of the content had red flags – first of all, in the meaning of contraband or in that of separatism. And not only that.

The lack of unbiased knowledge of Transcarpathia, researches on the region, its geographical distance from the capital, distorted informing and quite a number of other factors caused numerous legends about the region. Both for the man in the street and for the public and experts.

Fiction No 1. Transcarpathia is almost the same as European Union

Considering the geographical location of Ukraine’s westernmost region, the availability of borders with 4 countries of EU and NATO at once (Poland, Slovakia, Hungary and Romania, going from north to south) and the history of this area as a part of European monarchies and republics, Transcarpathian region could definitely be a candidate for would-be laurels of the most Europe-integrated region.

This opinion is further proved by the everyday life of Transcarpathians, who visit the EU on business, for their job or on vacation, some visiting relatives or having dinner with friends, whatever.

But the European Union is not only mutual history or habits, geographical reality or everyday conveniences. This means, first of all, high European standards and practices in all areas of life. And in this sense Transcarpathian region, unfortunately, is way below to the neighboring regions of the adjacent countries – Košický kraj and  Prešovský kraj (Kosice and Presov territories) in Slovakia, Szabolcs-Szatmár-Bereg region in Hungary. And it also is way behind by the key indicators of European integration to many of Ukraine’s regions.

So, for example, according to the latest research by an authoritative analytical centre “New Europe”, entitled “The European map of Ukraine”, Transcarpathian region holds ranks 8th among the 24 regions and Kyiv. Moreover, it gives in not only to the neighboring Lviv and Ivan-Frankisvsk regions, leaders in the rating, but to Sumy, Vinnytsia, Odessa, Volyny and Chernivtsi regions. 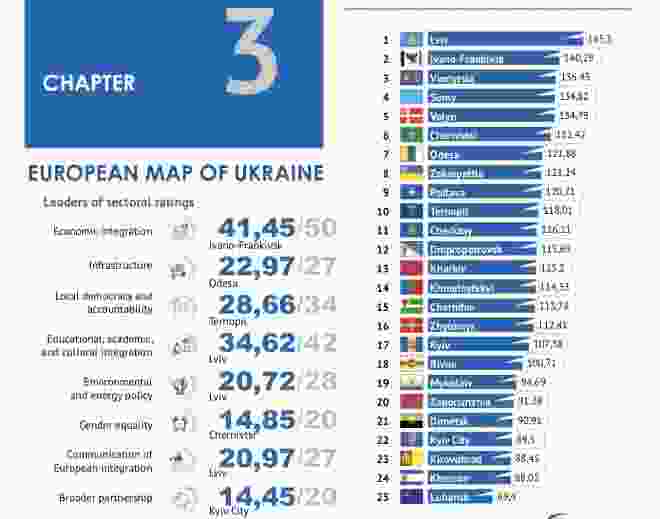 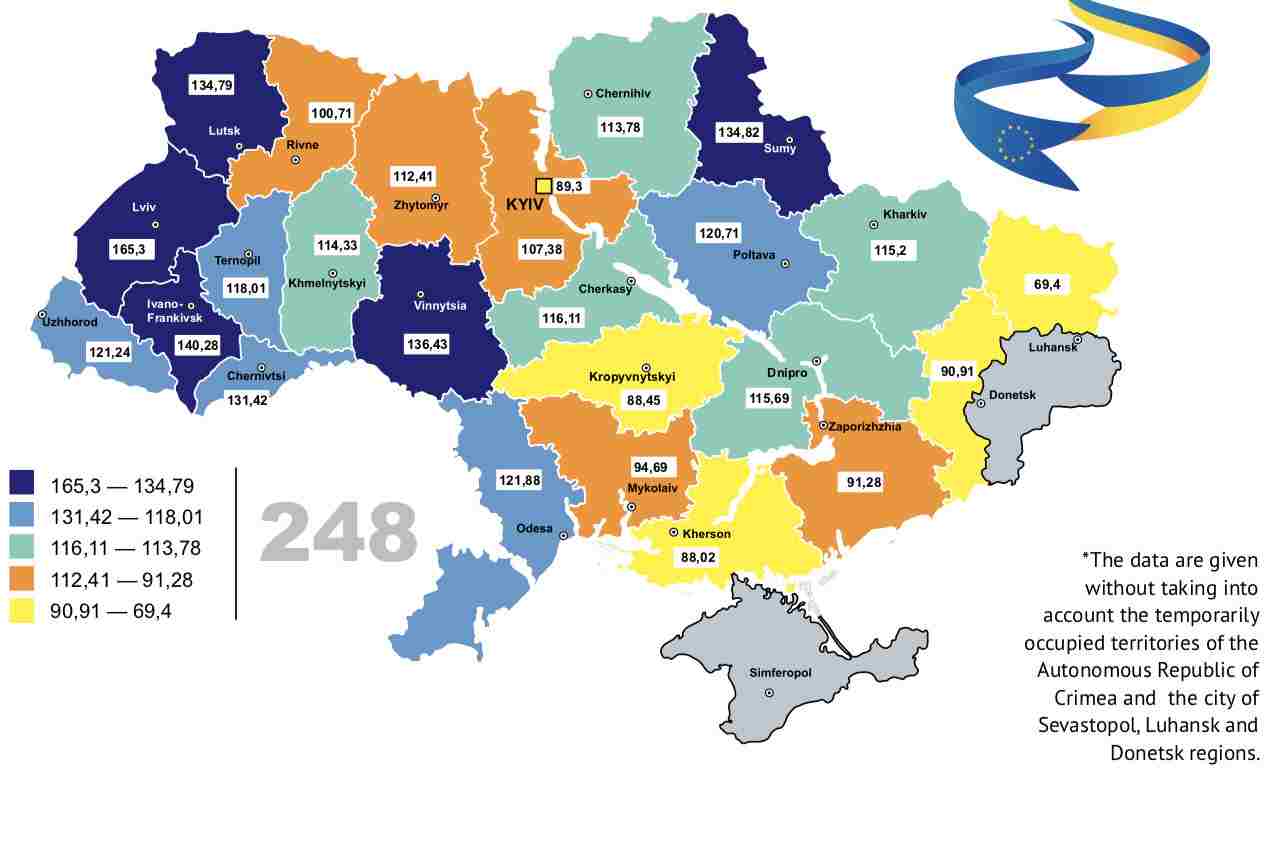 Transcarpathians, especially local governmental officers, really like to point out that it is Europe on this side of the Carpathians. But after a more careful look at the state of affairs in the region, it will appear that Transcarpathia still has to work hard as a region in many branches, not only to really get closer to EU but at least to catch Ukraine’s other regions. And this is, first of all, a question and a challenge to the local authorities and the local elite, experts, public activists and media.

This legend is adverse for the region, for, when Transcarpathian address the authorities, in particular, the governmental ones, complaining about the non-availability of air transport or of at least one Inter-city train in any direction, they get a response like “You’re already there, in Europe, be thankful”.

Fiction No2: Transcarpathia is a land of contraband and smugglers

Of course, with the region having the state border with 4 countries with better developed economics, contraband not just has to exist in such conditions, it simply functions as a business design with well-developed infrastructure. Some produce or deliver goods; others store them on this side and on the other side of the border, still others pack, hide, repack and sort. Then the goods get carried or transported, supported by some others and so on. This infrastructure involves a great number of well-paid positions, since on the other side of the border anything becomes more expensive twice, thrice and even more.

But in this complicated hierarchy of contraband local Transcarpathians, like residents of Lviv region and Bukovina, occupy the lowest steps, while the main benefit goes to the authorities’ offices in the capital. It is them who give cover to business contraband carried through the greenery*, and the “industrial” contraband, transported already with trailers.  This was mentioned by the ex-minister of Slovakia and Head of Strategic Councilors’ Department at the Cabinet of Ministers, Ivan Miklos, during the Varosh Talks discussion. He stated that it is enough to compare the data bases between the customs office in a EU country and that in Ukraine. The same truck exports, for instance, goods from Slovakia for one amount and, in a few dozen meters’ distance, the same truck imports, either these very goods or quite different ones, and the documents formalized legally.

Such common and industrial smuggling exists all over the world and is not a unique feature of Transcarpathia only, even from the perspective of Ukraine. But then again, this is not our key counter-argument against the opinion that Transcarpathia is a land of only smuggling and smugglers. This opinion has been often spoken by some politicians and media for the last 5 years. 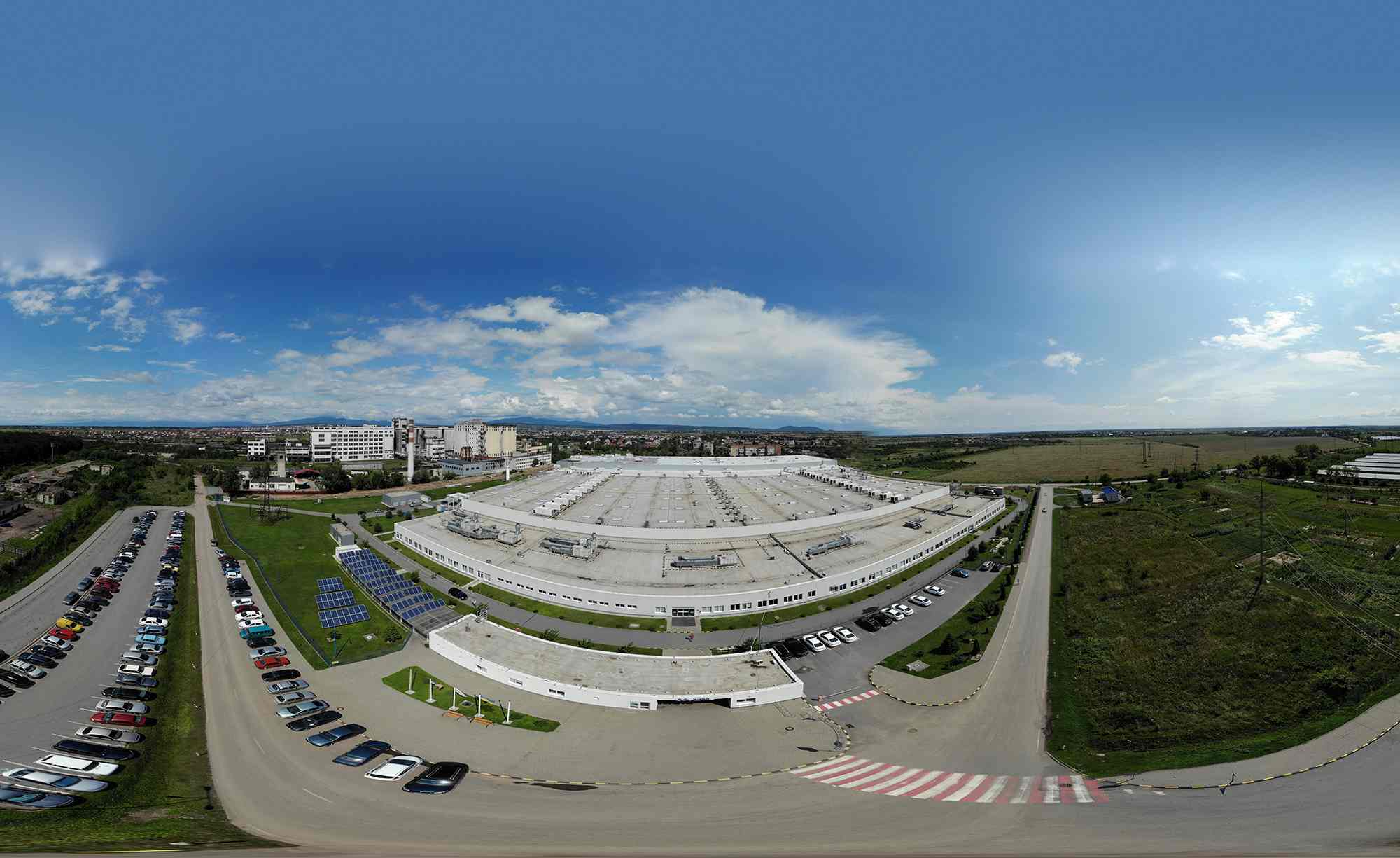 Our objective is the following: along with the contraband lines, a considerable amount of hi-tech enterprises with foreign investments, producing Nestle coffeemakers, Starbucks café furniture and under the license of IKEA, hockey sticks for NHL and one fifth of all skis in the world, components for BMW, Audi, Porsche, Mercedes; Skoda cars are assembled at Ukraine’s only acting plant of EuroCar.

You will not find such a place in the world where production sites of world’s leading electronics manufacturers, such as Flex and Jabil, stand so close from each other as in Transcarpathia. Here the distance between these is only 40 km. You may add to this list of enterprises those of Fischer, Yadzaki Ukraine and a number of others. Although there’s everything necessary for such production plants to grow in number in Transcarpathia, forming whole clusters. It would mean that some larger plants stimulate building-up of other manufacturers’ sites close by, to cater to the needs of components, services, raw materials.

Fiction No3: in Transcarpathia separatism ideas are popular and everybody’s got a second passport

This legend is based on many stereotypes and manipulations. They say Transcarpathia has never been a part of Ukraine throughout its history, and at the referendum in 1991, held at the same time as the all-Ukraine one, Transcarpathians voted for a status of self-governing territory, with 78% of positive votes. However, the referendum had no legal force. But add up the large number of blatant fakes appearing in media for the last 5 years, with the background of the Crimea annexation and the war in Donbass. The fake news say that Transcarpathia demands of Kyiv either self-government or Rusyn autonomy or Hungarian autonomy or Rusyn and Hungarian one, and sometimes  – a complete separation. With a rare eventuality, all these fakes were circulated by Russia’s state media.

At the same time, the fiction on Transcarpathian separatism was enforced with an adjacent opinion: it mostly Hungarians that live in Transcarpathia and all of them have Hungarian passports and want to join Hungary.

No doubt, these issues, similar to the phenomenon of separatism, need special attention and research. But it is very important today to pay attention to the fact that all sociological research for the last years only proves the miserable support level of separatism in Transcarpathia.

Thus, according to the information by the Kyiv International Institute of Sociology, published in the Weekly Mirror, in December 2014, 91.5% of Transcarpathians’ vision of the region’s perspective was as a part of unitary and centralized Ukraine. And the indicator was higher than that of the neighboring Lviv region. Although the latest research by the Institute, done in April 2019, showed that the percentage of Transcarpathians voting for unitary and centralized Ukraine grew down to some 26%, but half of the region’s population stand not for autonomy or separation but for decentralization and wider authorities for the local governmental bodies. And that is the official course of Ukrainian power. Only 8% of Transcarpathians in April this year spoke for federalization of Ukraine, which means autonomy. Yet 4% declared for union with Hungary. Although the latter indicator is 13 times higher than that in December 2014, but it should be noted that the statistical error for the research in Transcarpathia makes up 7.2%, i.e. it is higher than the very data.

According to the information from another research, held in Transcarpathia by the Fund of “Democratic Initiatives” n.a. Ilko Kucheriv and “Ukrainian Sociology Service” in December 2018, some 81% of Transcarpathians think that the region must be a part of unitary Ukraine and only 3% are for the autonomy as a part of a federation and 1% want to withdraw from Ukraine. 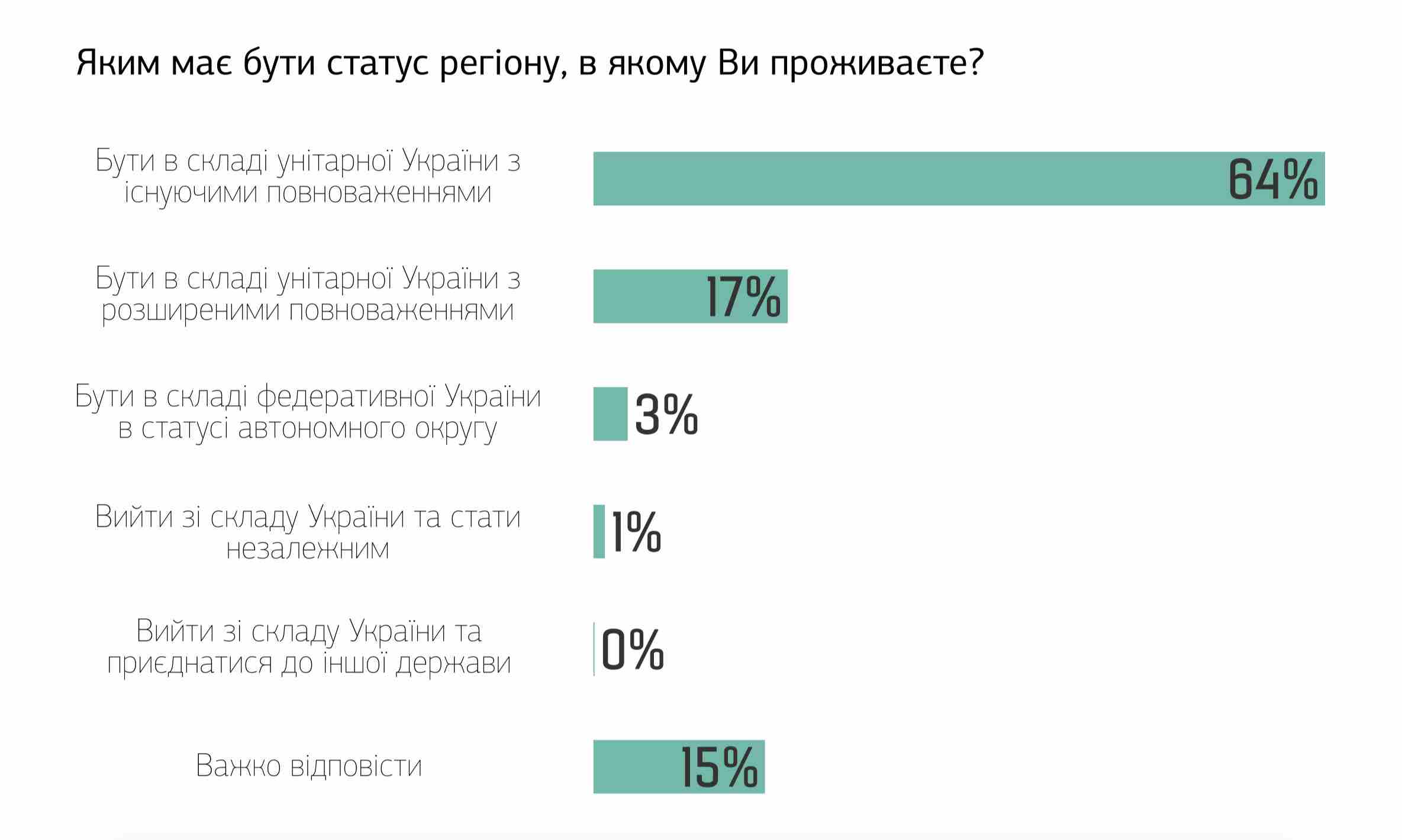 As for the passports and the Hungarian national minority, according to the latest available official information by 2015, the number of applicants for Hungarian citizenship was 124 thousand Ukrainians (data from Hungarian media), and some 94 thousand Ukrainians obtained it. The data were made public by the State Secretary of Hungary, in charge of the national policy in the government of Hungary, Yanosh Potapi. The figures reflect the approximate number of the Hungarian national minority in Transcarpathia: according to the population census held in 2001, some 152 thousand Hungarians were living in the region. At the same time, according to the info in the research Summa-2017, held in the region by Hungarian analytical institutions together with Hungary’s Academy of Sciences, about 30 thousand of ethnic Hungarians have left Transcarpathia for the years after the official census of enumeration, with the cities of Berehovo and Uzhhorod losing up to 20% of their Hungarian community, which is very pitiful.

These myths on Transcarpathia, as well as other ones, are in fact harmful for the region, slowing down its development and distorting its perception from beyond. That’s why, with this article we have tried at least make a balance of them, if not contradict them.

At the same time, we urge you, our readers, to tell of the positive and negative myths, fictions and stereotypes about Transcarpathia you have encountered yourselves.