The Dovhe HUB: schoolgirls and their teacher of computer studies are changing their native village in Transcarpathian countryside

It takes three people only to change a village

Tamara Levko is 12 years old. She is a volunteer, teaching programing to junior schoolchildren. The girl conducts lessons of Scratch for pupils of 3-rd and 4-th classes in the village of Dovhe, a settlement in Irshava district, with some 7K of population. Her mother, a teacher of Computer science, Halyna Levko-Rubets, together with 2 schoolgirls, Myroslava Chernushevych and Karyna Fechka, founded… a hub in a small Transcarpathian village. The founders themselves call it the Opportunity Space or simply Dovhe Hub. 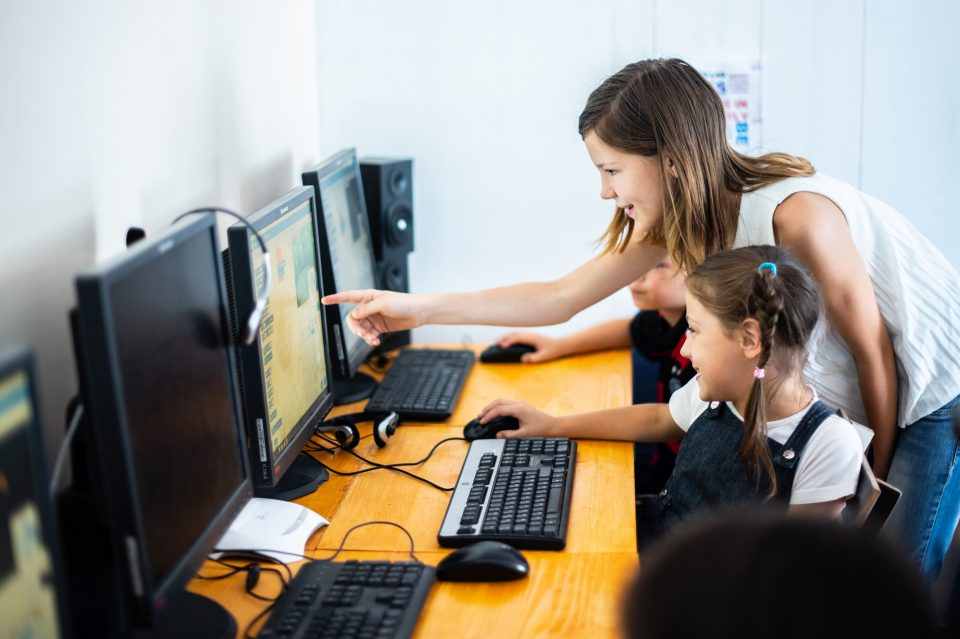 A teacher, two schoolgirls and a workshop on croudfunding

We had been working on launching the hub for almost a year. We did everything by ourselves – the wooden furniture, pillows, lounge chairs. Then painted everything and cleaned the facility. By the way, it is subdivided into 2 parts. The first one is intended for children to meet, communicate, have fun and study. The second one is meant for programming studies and watching documentaries on a viewer.

We are currently participating in a Ukraine-Slovak project, named “An active citizen – effective authorities”, says Myroslava Chernushevych, a co-founder in Dovhe Hub. – Last year we had some studies in Uzhhorod and discussed the problem of 2-shift school studying in our village and the like: children don’t have a place to study after their lessons and no place for extramural activities.

Myroslava says that nothing like the space they have created ever existed in the village and nobody even dreamed of it. As for the financial support, outfitting of the room and the general project launching, the girls could give a real training workshop to even many town projects, for they used almost every possible source for raising funds. 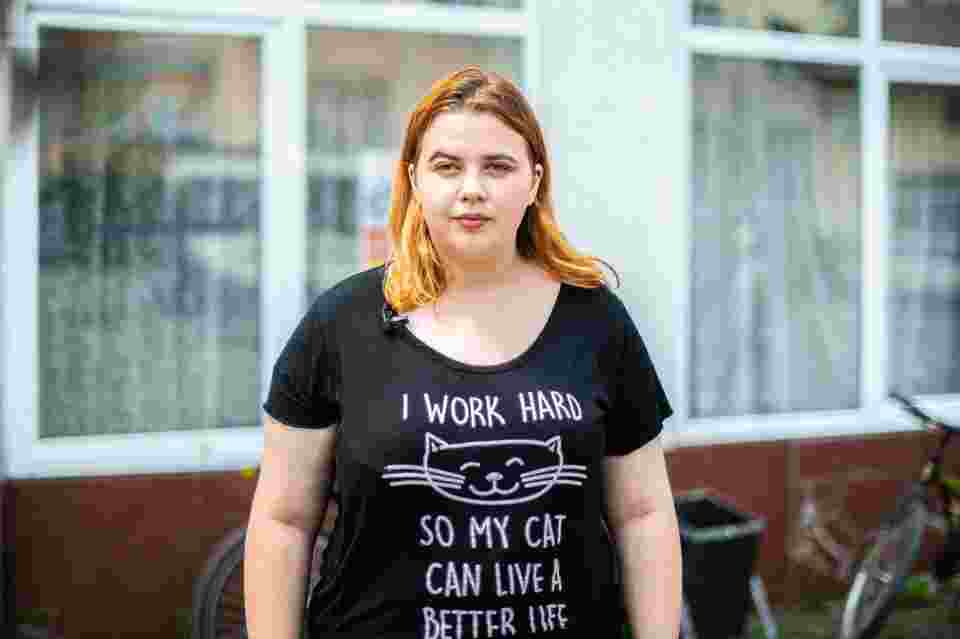 The facility was given to us free of charge by the village council. The computers were presented by Code Club and EPAM companies. Thanks to them we have the opportunity to teach programming to pupils of 3-rd and 4-th classes. We also raised some money by showing films in the open-air format. Collecting waste paper gave us 2 600 hryvnias and another 2 000 we gained at a charity fair. We had a volunteer from the Corps of Peace, Nick Borodin, working in our village. Using the American platform GoFundMe, he raised another thousand dollars for us. We were sent funds even from China, – says the fifteen-year-old schoolgirl, Myroslava.

Karina Fechka, another co-founder of the Dovhe Hub likes the place mostly because of the quietness and then, there are books and one can watch documentaries on the video viewer.

– I joined the project a little later that Myroslava and helped mostly with the equipping of the facility. It seems to me that our hub is important, first of all, for the opportunity for kids to study programming using new modern computers. Most villages cannot afford it. What I also like about it is that we launched book-crossing in Dovhe, and our home folks can freely exchange books. And, we have English courses. It is taught by a volunteer from Dovhe, Ivanka Synetar, who is a student in Tranava, Slovakia. We are also planning to launch lessons of German and Slovak, – says Karina. 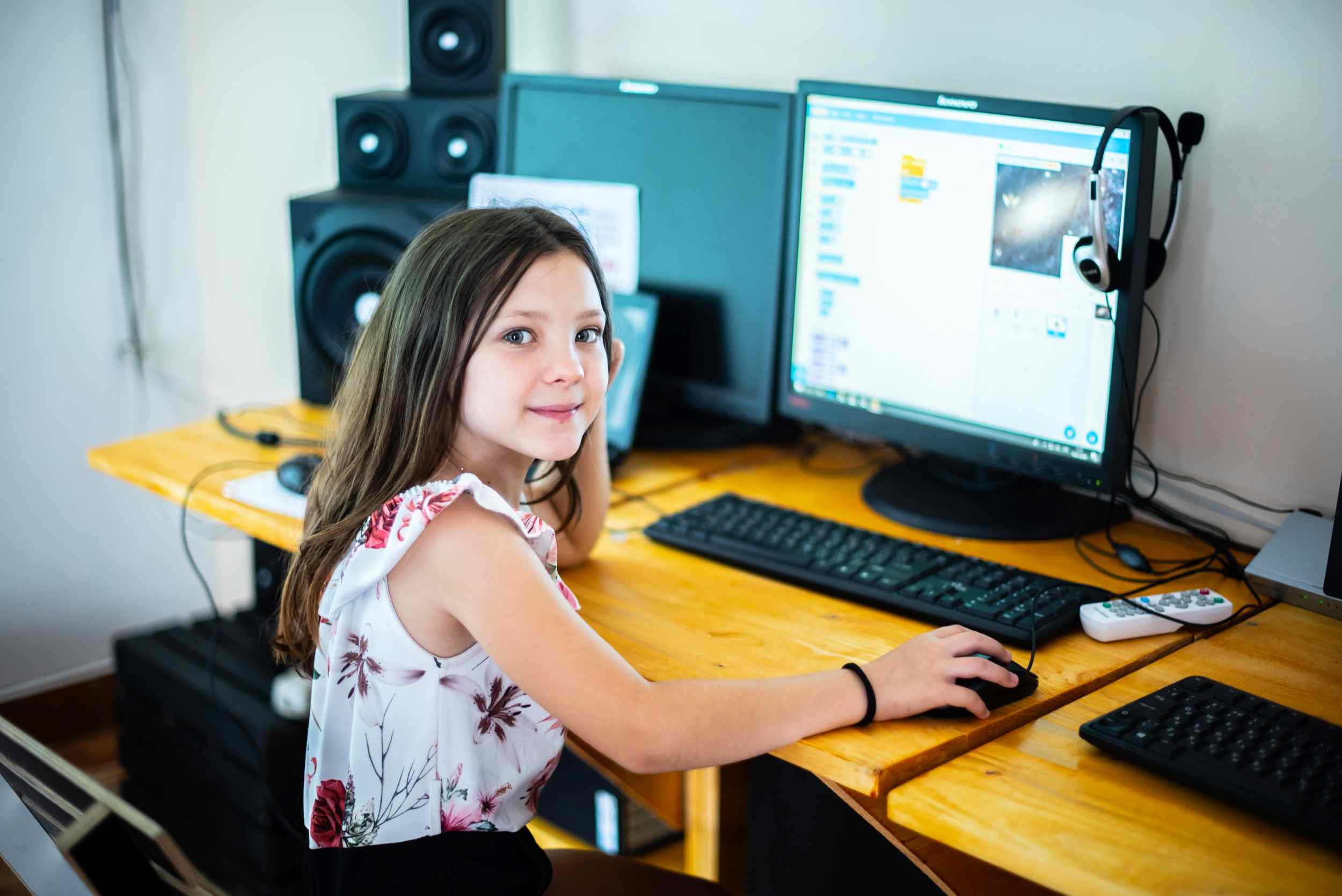 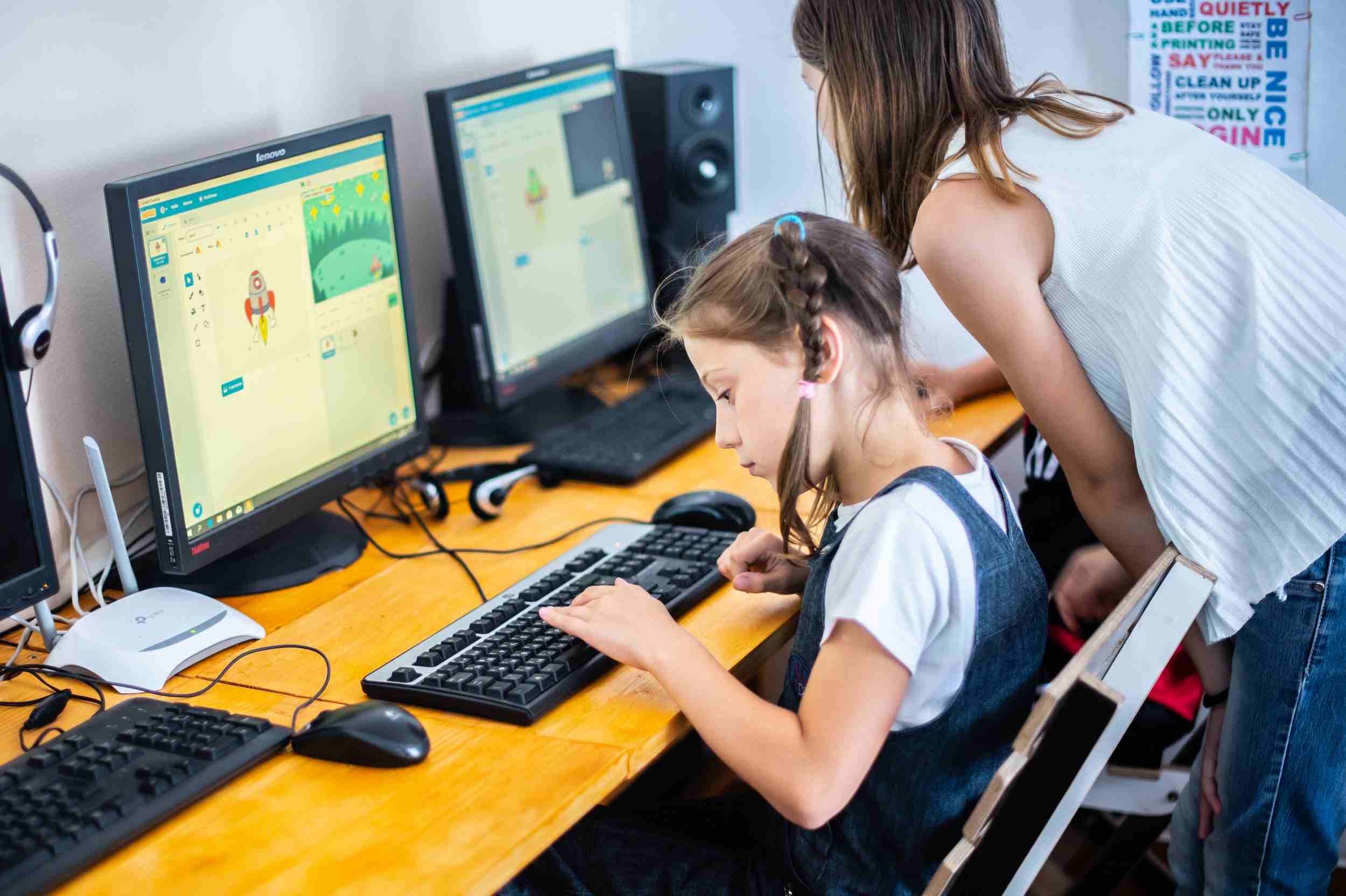 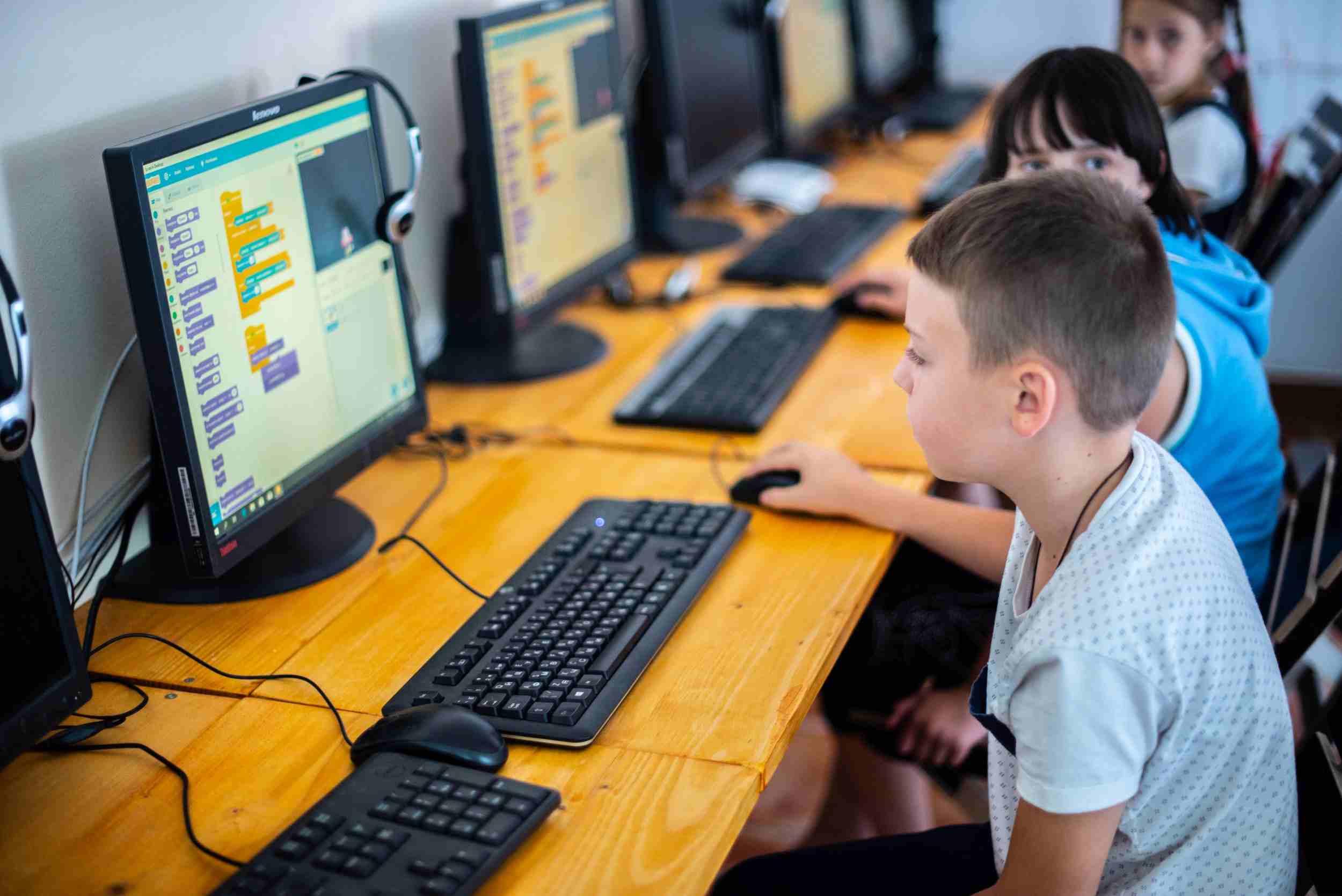 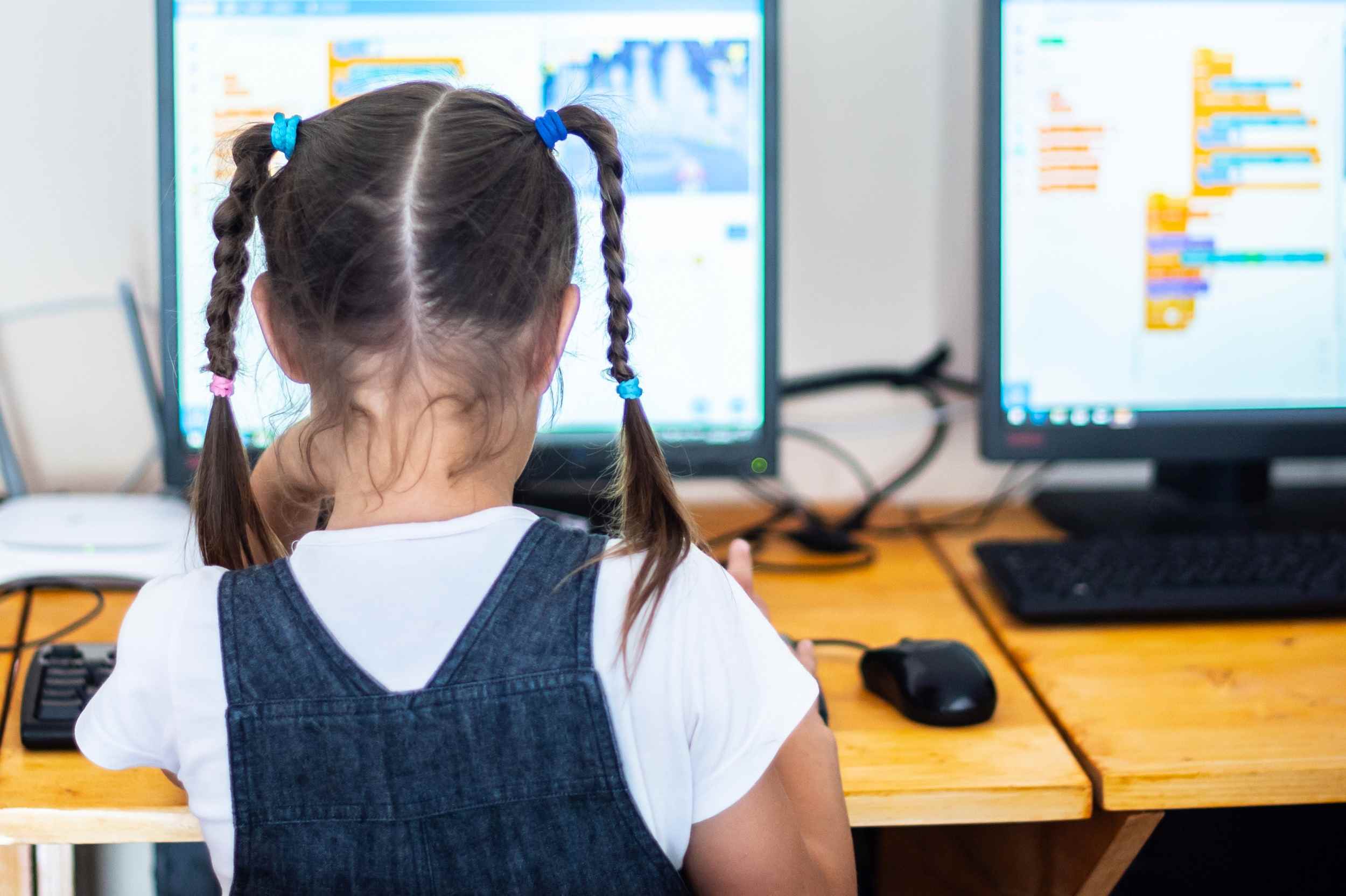 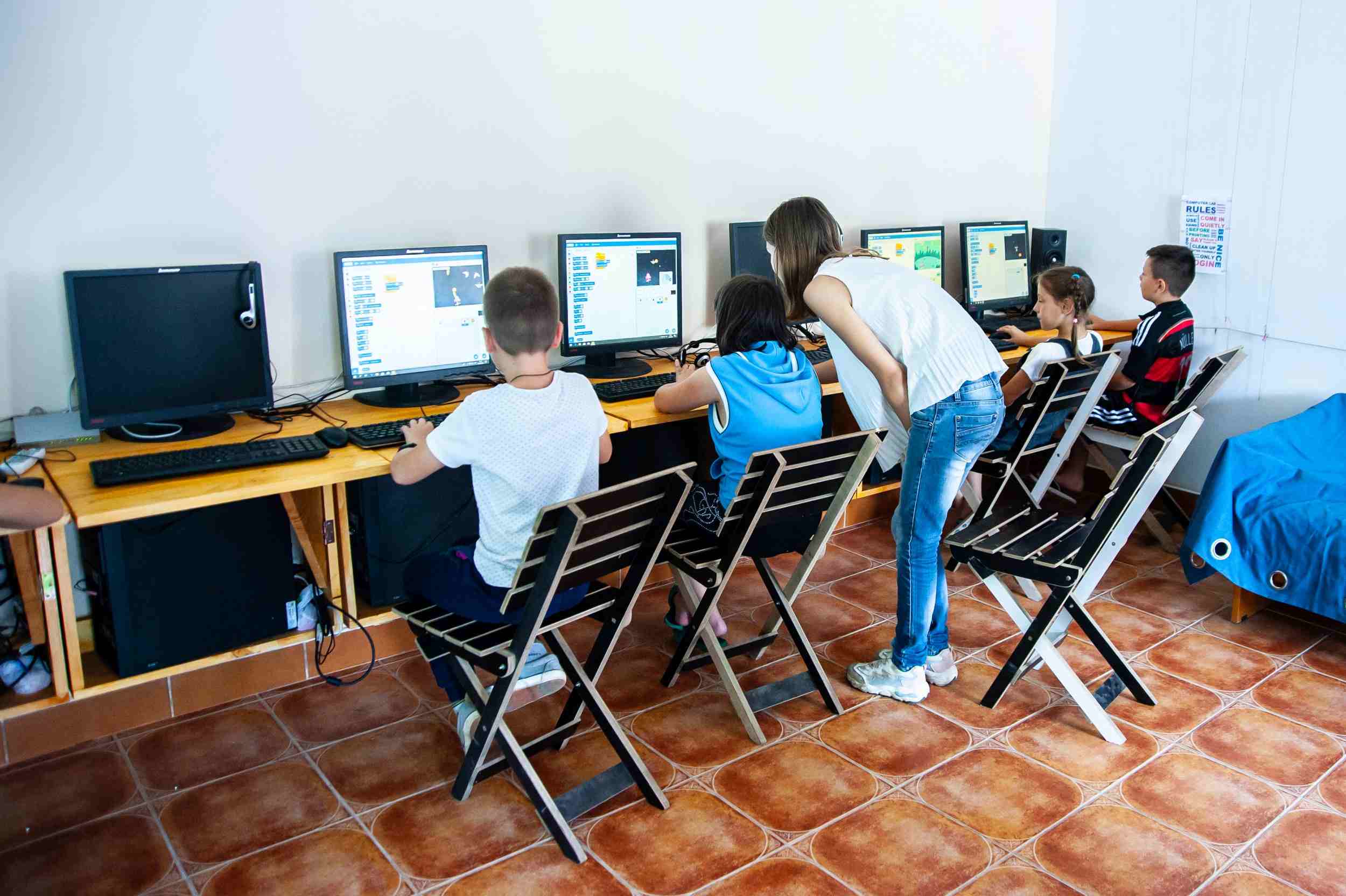 The teacher of Computer Science, Halyna Levko-Rubets, says that it is mostly the pupils who are to be praised for the establishingof the hub.

– It is quite a long story – I mean the way the hub appeared at all. We were then participating in a Ukrainian and Slovak project. In its course, teachers took studies in Uzhhorod and Bratyslava and, following the results, they had to gather up their teams at schools. In Transcarpathia, it was in Khust, Uzhhorod and Dovhe. Last April there was a seminar held for pupils, and that was the starting point. The kids were given felt pens and map paper and asked to draw ideas that could improve their lives in their native towns and villages. Actually the HUB – that’s what they drew then. Besides, there were two other teams, supporting the project “Dovhe StreetWorkout”, designing a sports ground in the street, and a project on publicity of the village of Dovhe and the Teleky palace located in our village. Both of them are currently being carried out as well, – Halyna recollects. 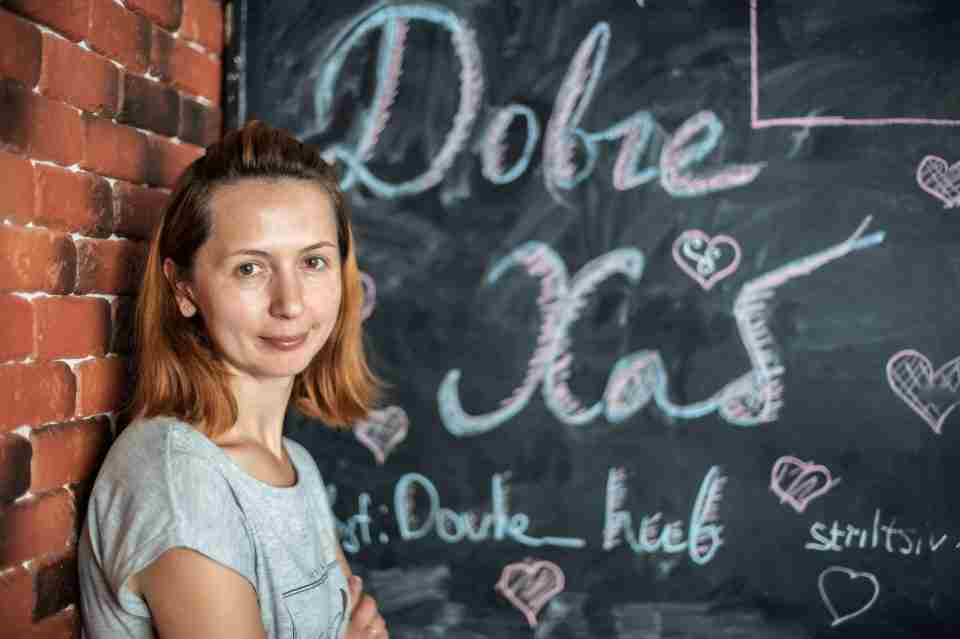 What it is like, when a 12-year-old schoolgirl teaches programming

– A I am a volunteer and teach kids to program in Scratch. My first volunteering experience was in Irshava, and this summer Halyna Volodymyrivna asked me to teach kids here, in the HUB, too. It is already the second module this summer. I studied Scratch as I was a pupil in Class 4 yet. I got really interested and began to design projects myself. It is exciting for me to teach kids what I learnt myself. There are two more girls in our class that are really good at programming. I am currently studying HTML and JavaScript. I would like to create sites in the future and gain profit from that, – says Tamara Levko, the volunteering teacher of programming. 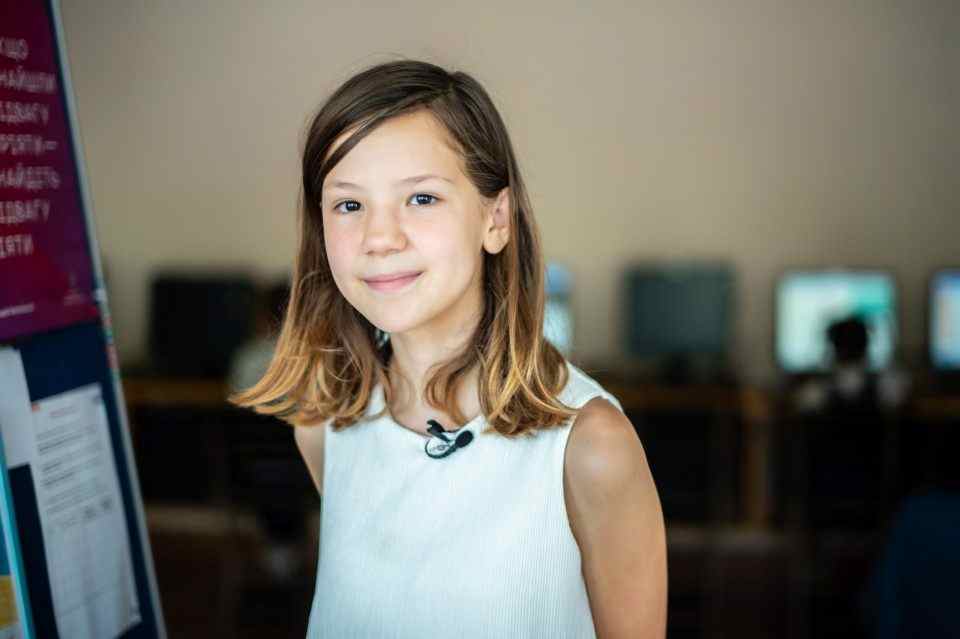 Nothing would be possible without support

Being a teacher of Computer Science myself, I do realize: this is the Internet era going on, without any limitations, either material or physical ones. We can advance – and that is a source of motivation and a stimulus for me. We can be whatever we want and wherever we want. We are living examples to prove that everything is possible. Even a provincial village can receive funds as a support for launching an educative location, from quite unfamiliar people from abroad, people that don’t know us personally at all. Someone sent 10 dollars and someone else – a hundred. And we were really surprised. And the same goes for locals. Funds for the sports ground constructed by three schoolgirls from our school were mostly received from Dovhe inhabitants now living abroad, – Halyna says. 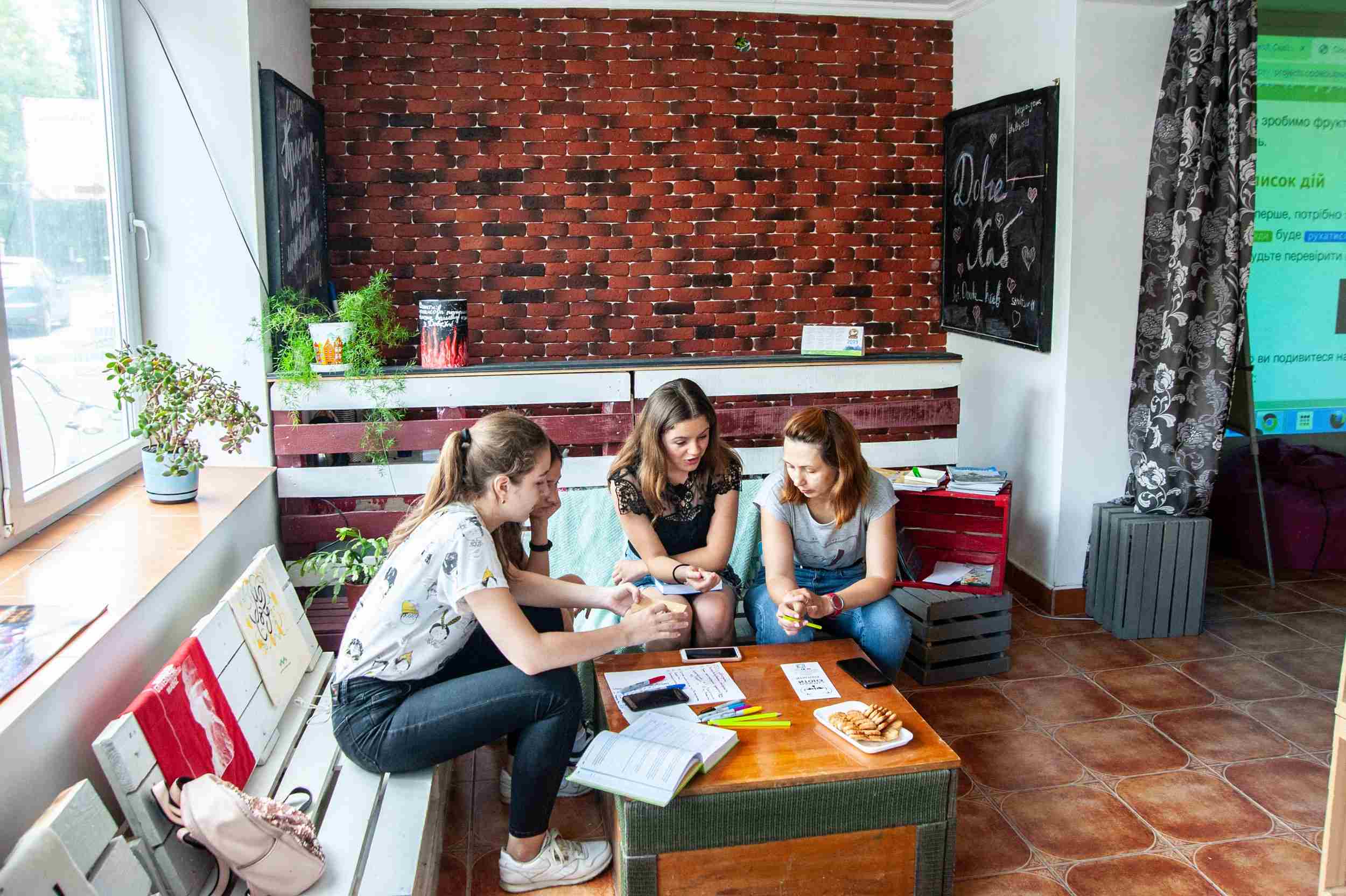 The Dovhe HUB also includes a book-crossing point, the first one in the village. In order to take a book for reading, you have to bring one of yours and put it to the shelf. The HUB founders were worried at first: people might bring old and dull books…But their fears were not justified: readers bring really nice editions and share them with pleasure. Valentine Kuzan, a native from Dovhe and a well-known photographer nowadays, helped make the HUB bookshelves more modern. He managed to do it due to his own page on Facebook, raising over 10K hryvnias to purchase modern books.

– I am glad that we have succeeded in completing a few stages. First, as participants of a program aimed at improvement of a dialogue between citizens and authorities, we managed to get this communication going on, – says the teacher. – We visited the village council, had numerous conversations, arrangements. We had attention and we were supported. Secondly, we involved many caring people. We even had Internet connection installed free of charge and we use it also free of payment. Our project proves that you can really make your desires come true, if you really want it. 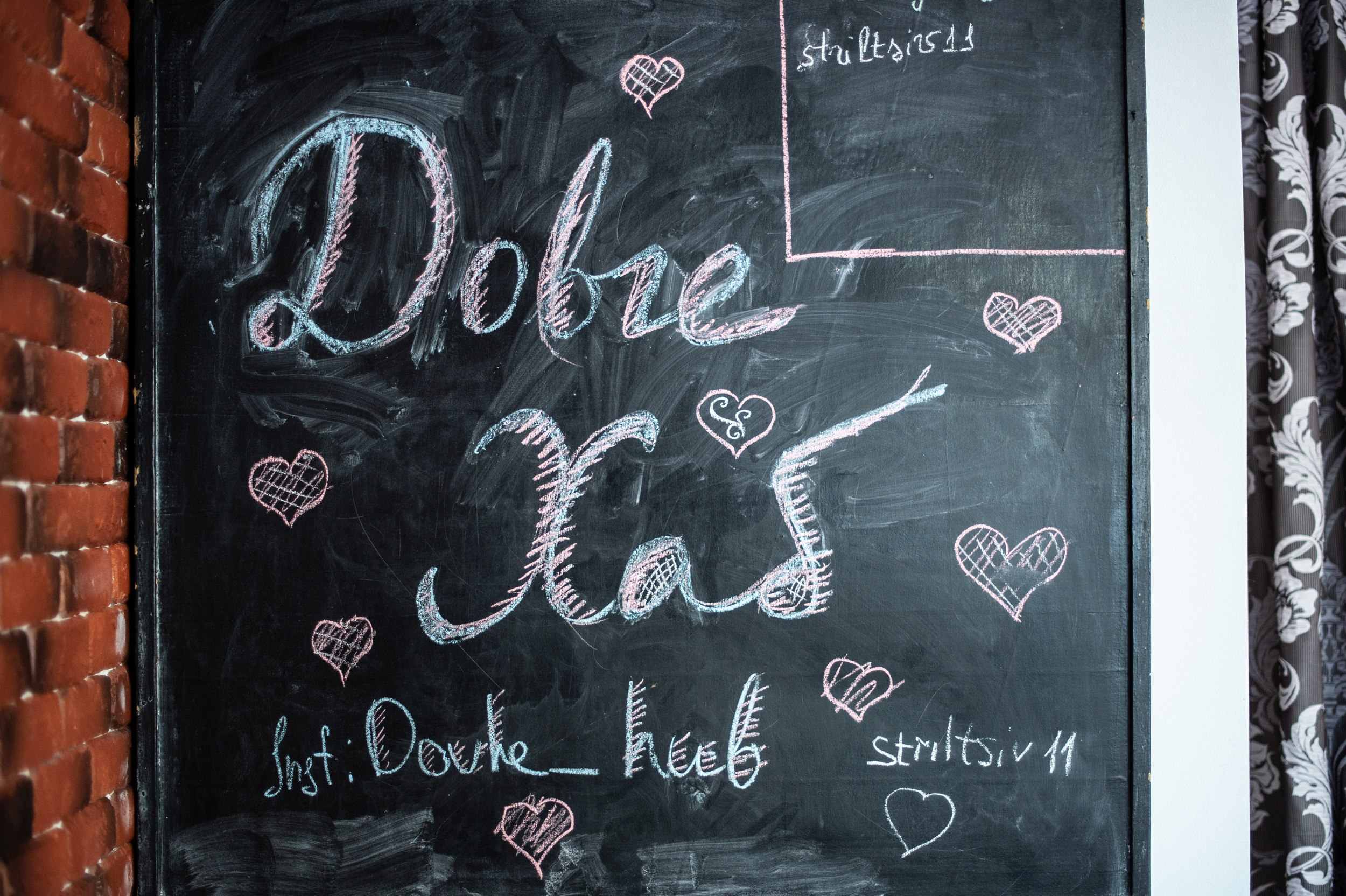 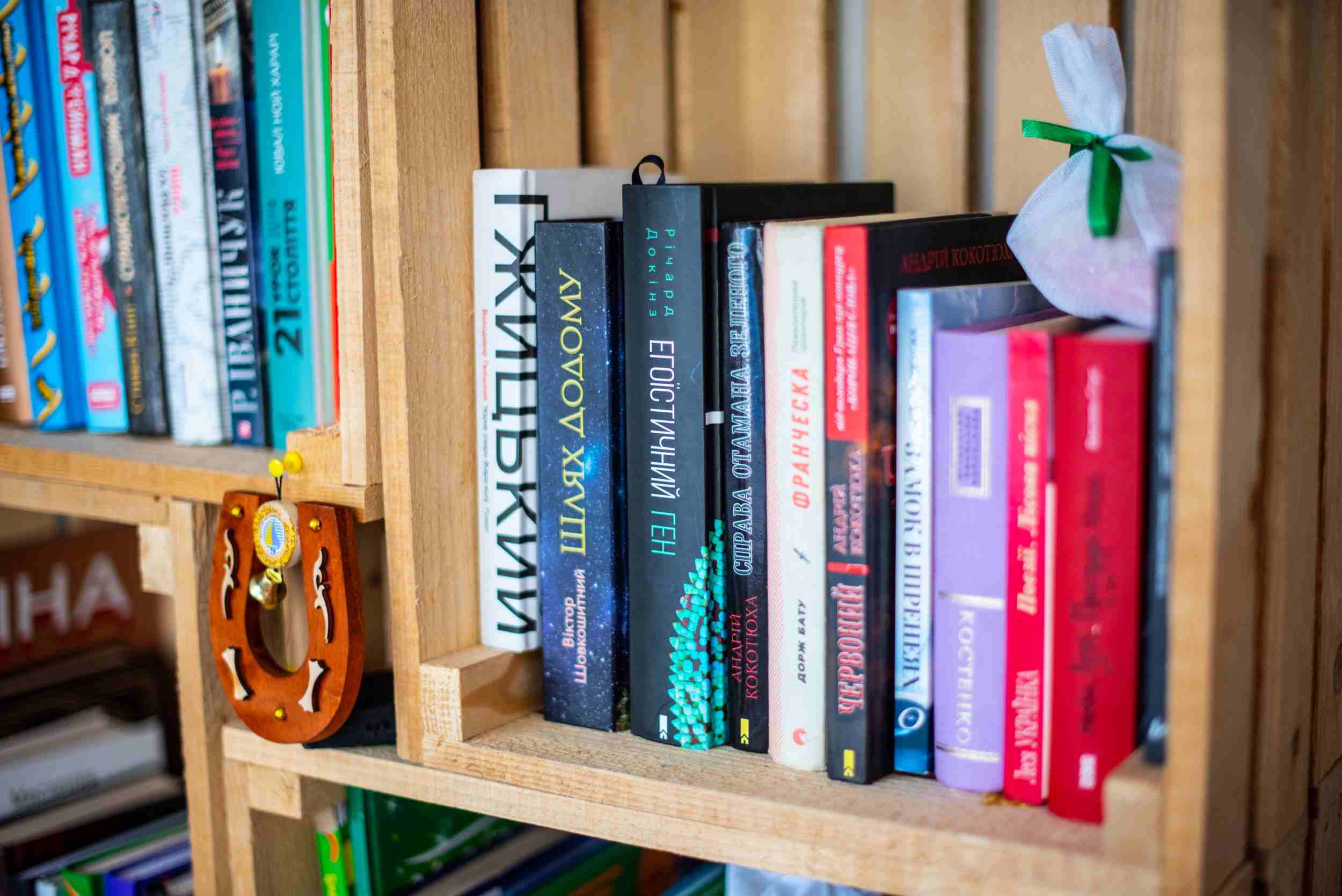 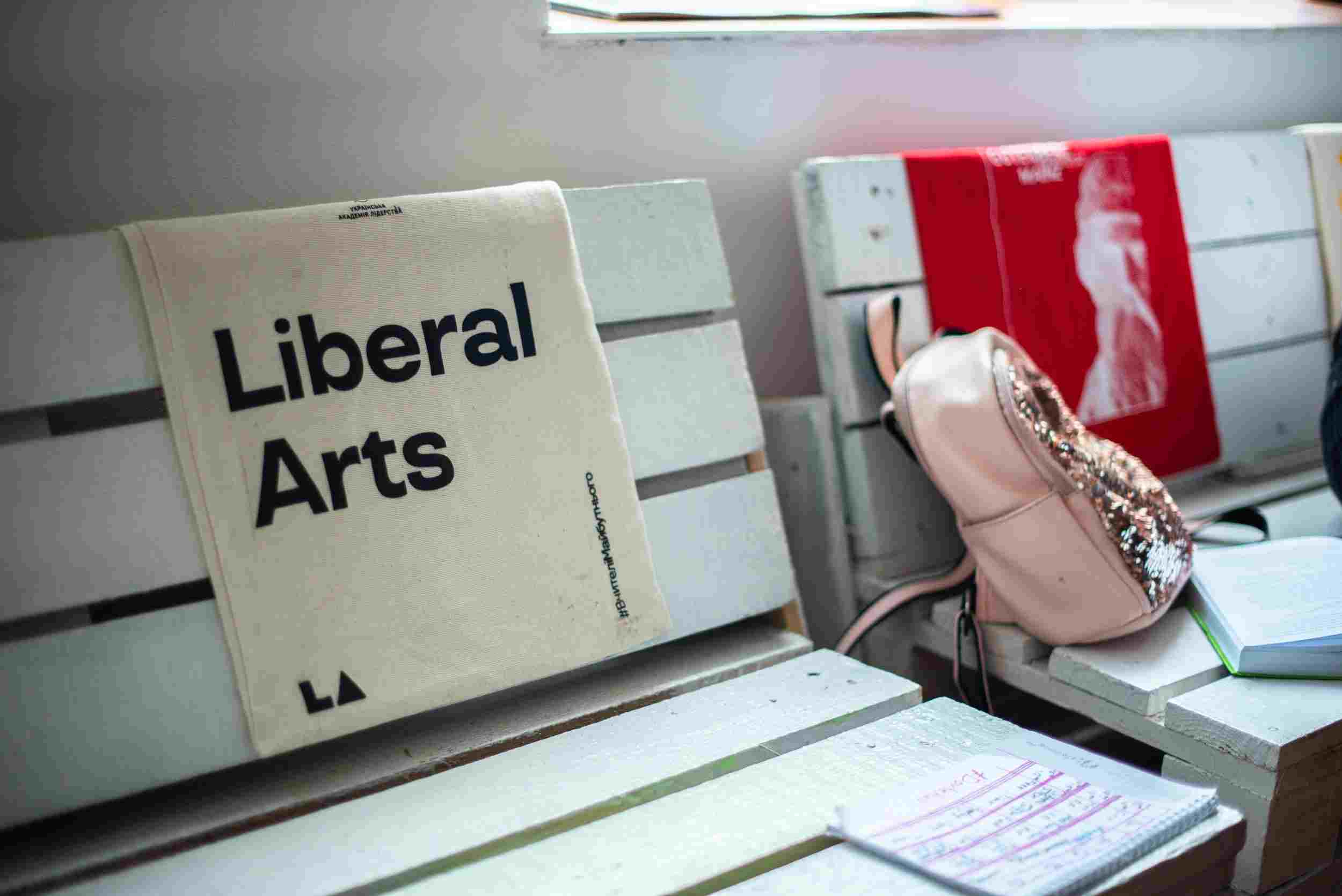 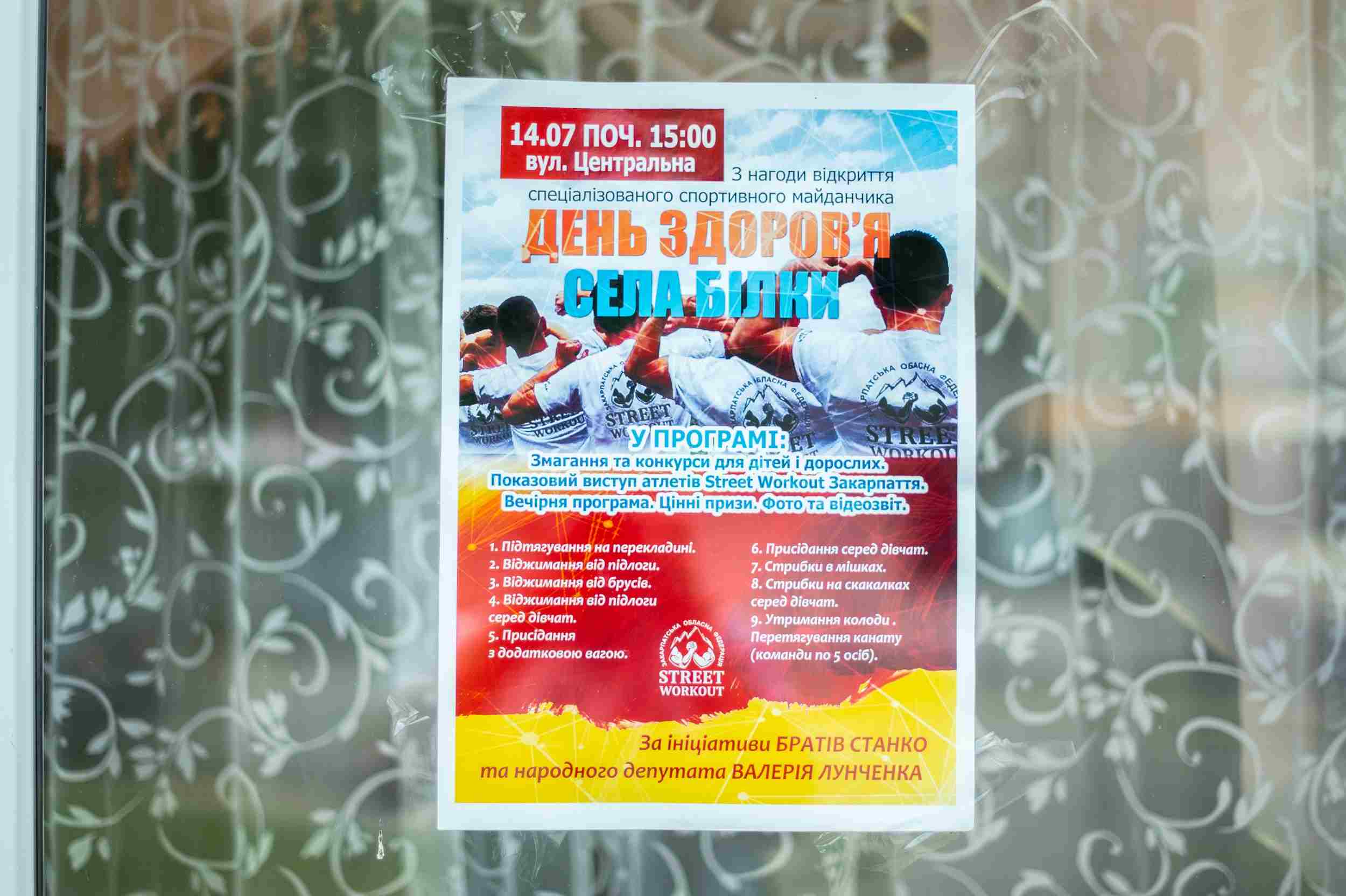 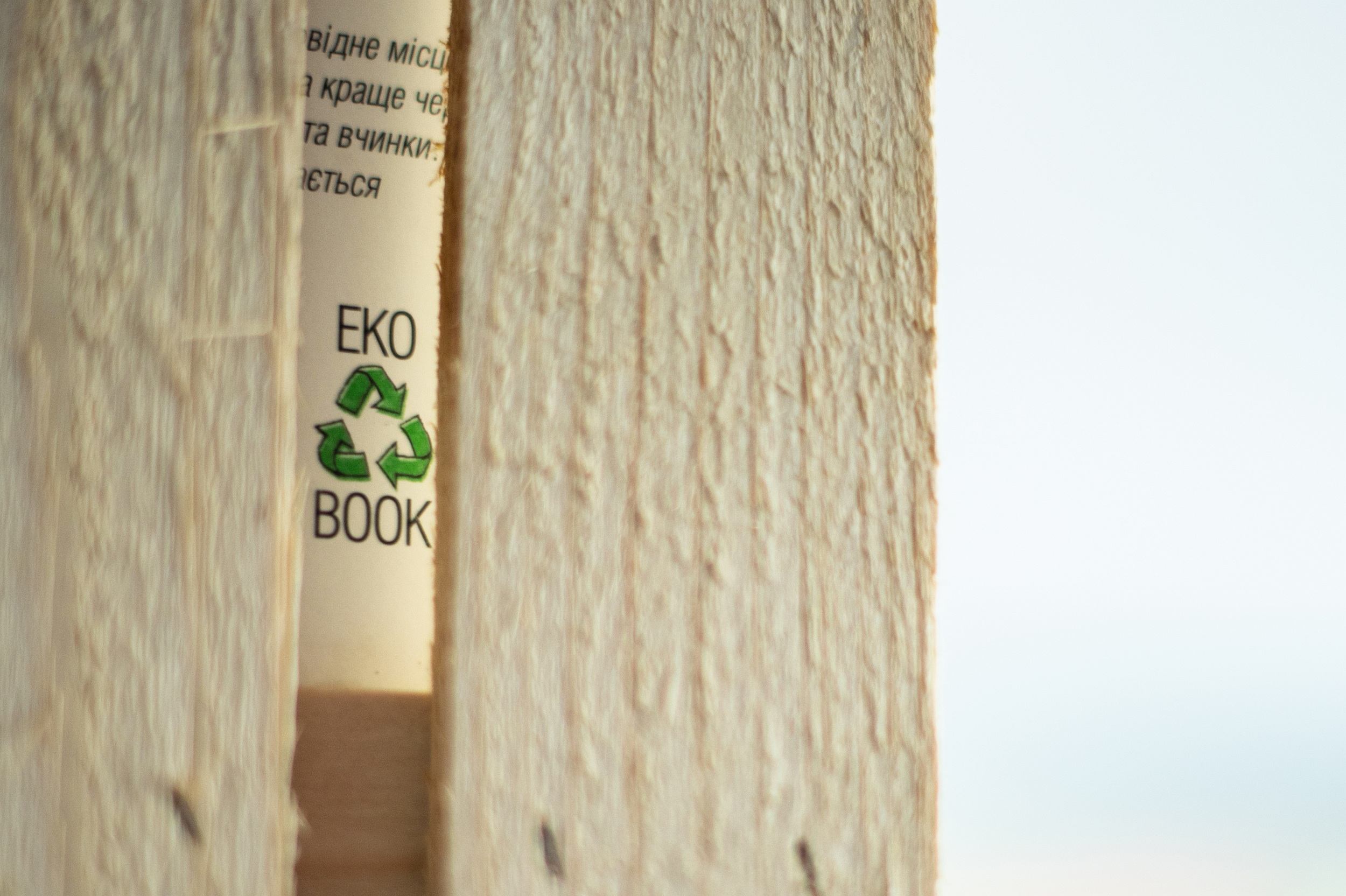 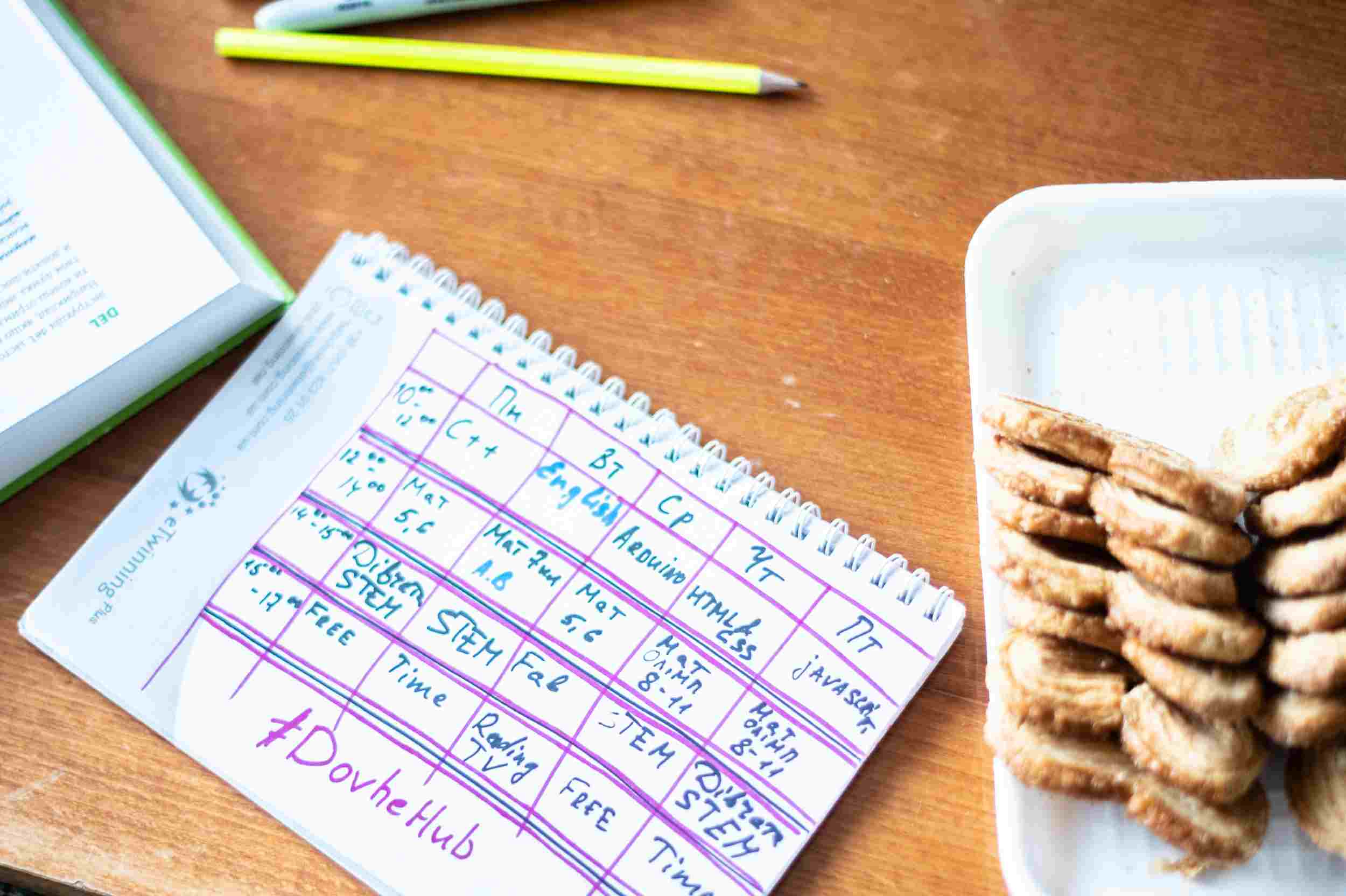 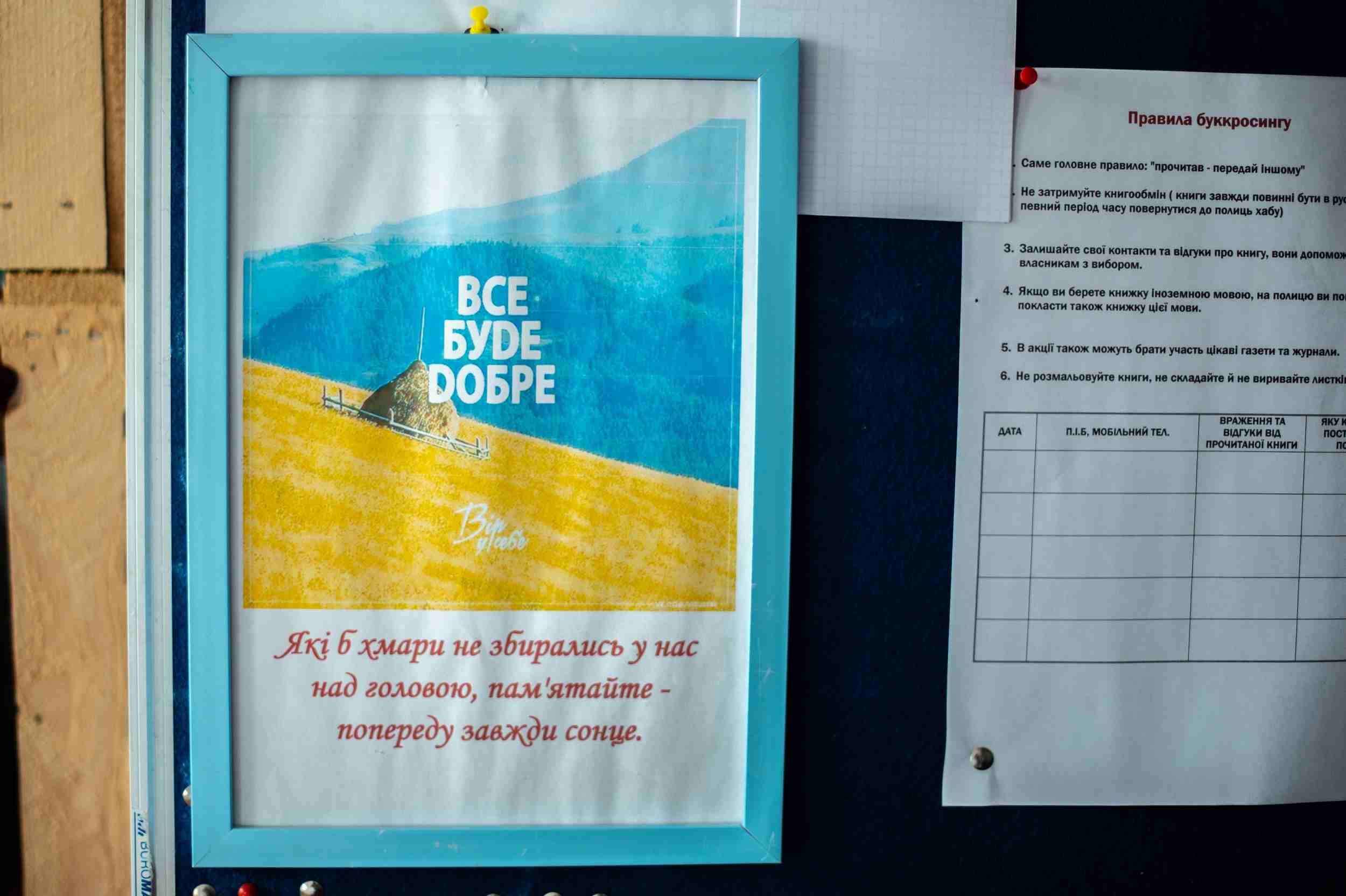 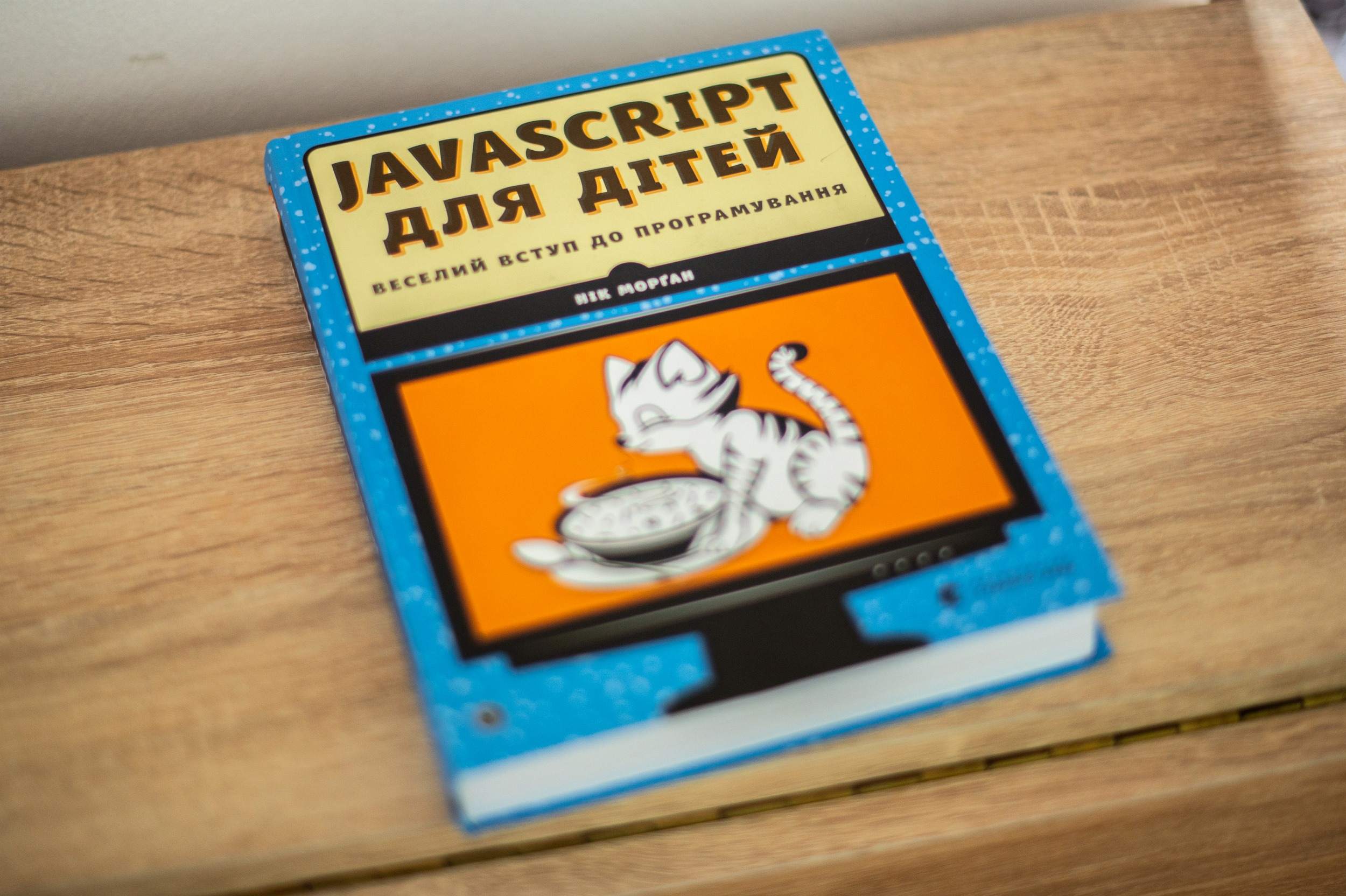 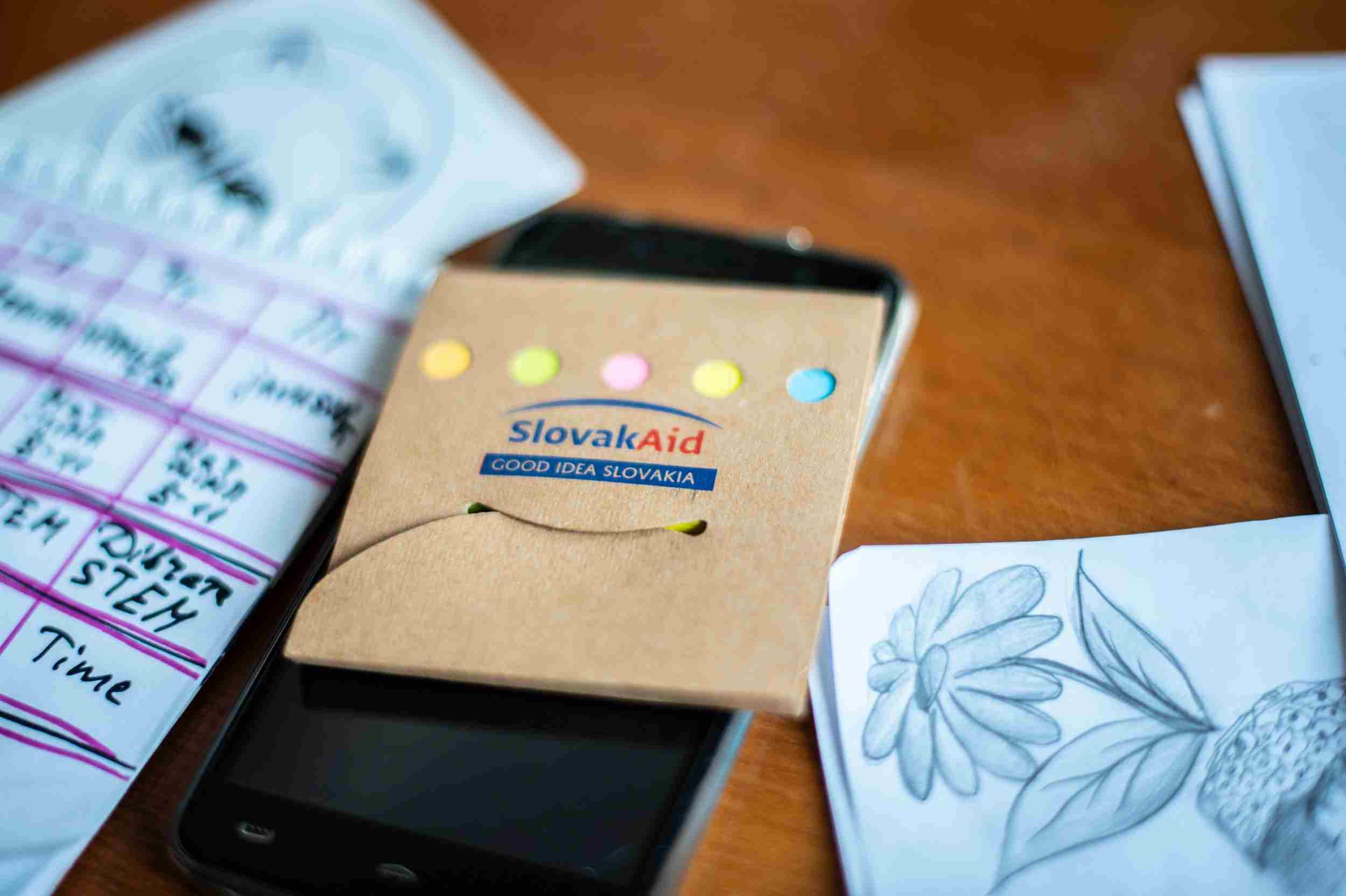 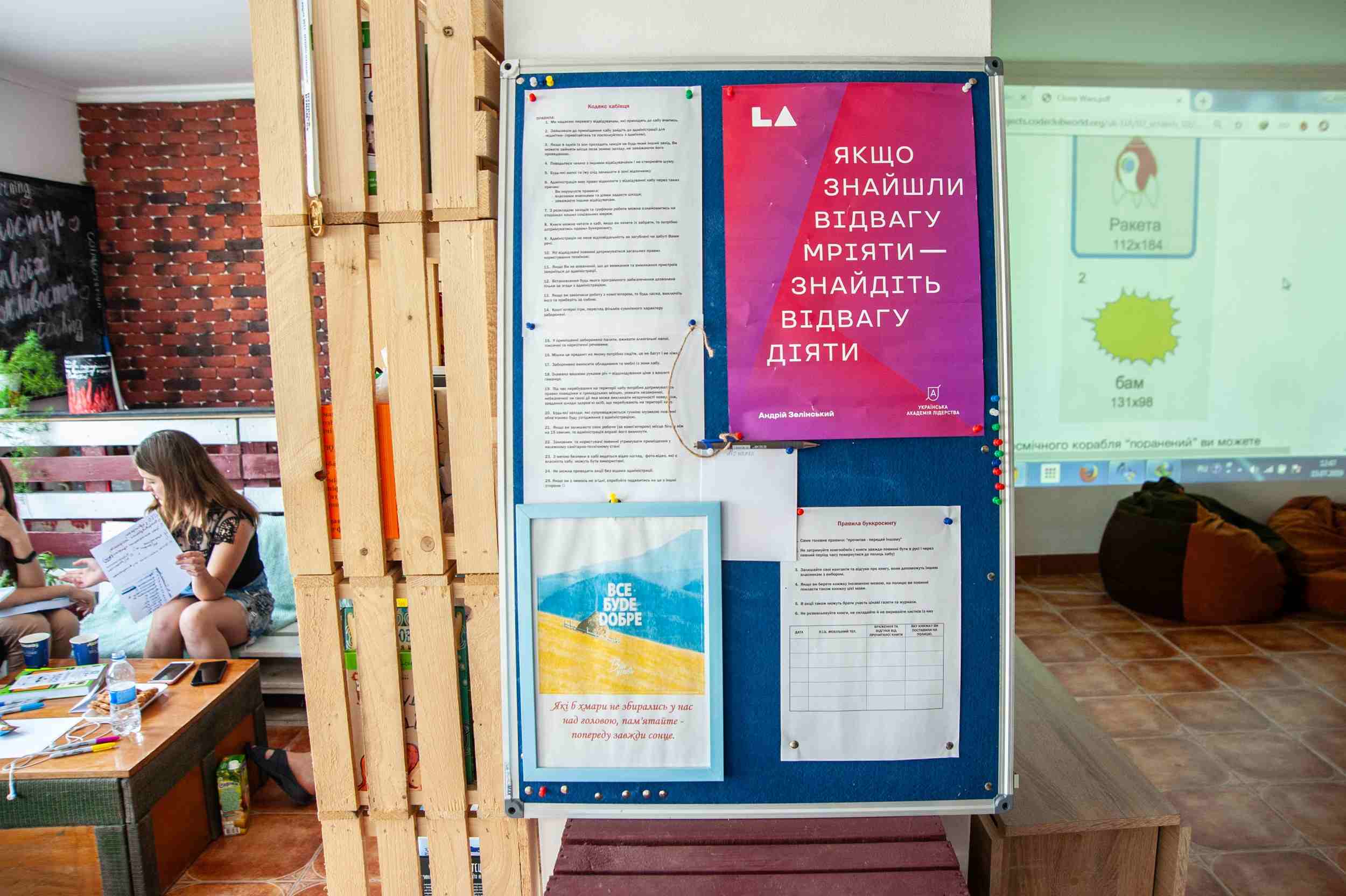 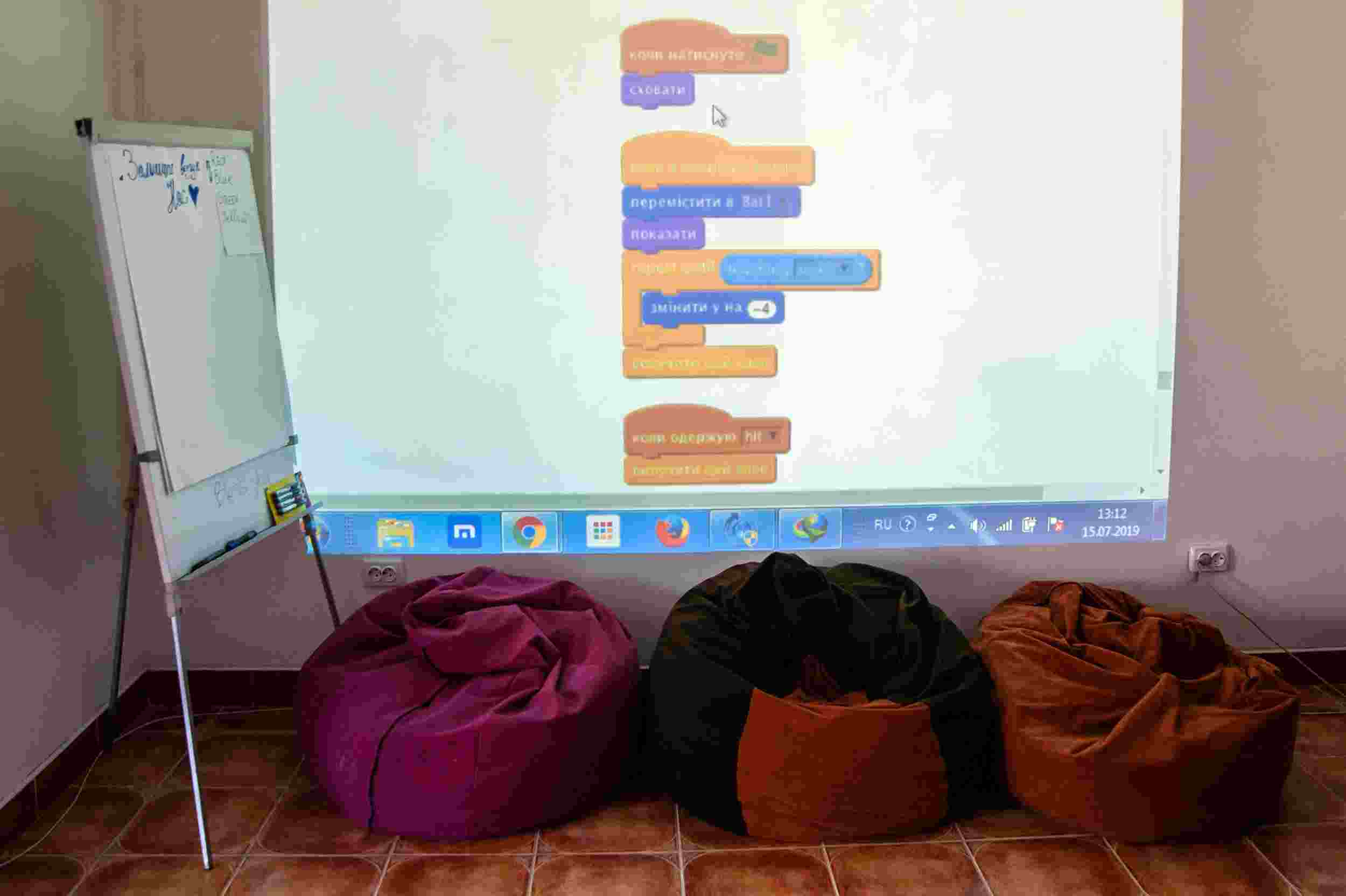 After launching the HUB, the founders seriously considered the need of such location not only for kids but for adults as well. So in the week-end interesting events for a senior generation may appear on the schedule.

The STEM girls of Dovhe

The abbreviation STEM comes for S as in science, T as in technology, E as in engineering and M for mathematics. And the Ukrainian project STEM girls is aimed at teaching girls in these areas, since there are only about 25% of graduates among STEM staff.

All over the country, over 50 educational establishments joined the program. And there is only one from Transcarpathia – the secondary school of Dovhe. Two school leavers started it – Tetiana Symkanych and Yulia Kopolovets.

– Our main task is to motivate the girls by supporting them in learning various technologies and explaining what they are capable to reach using their brain. Help them realize they should not be afraid to be smart and be themselves, go ahead. I want our girls to realize they’re strong, too, and can reach their goals. We have lessons in mathematics, engineering, robot technology, TED monologues, English studies, various experiments and researches on the program, – Tetiana shares her thoughts with us. 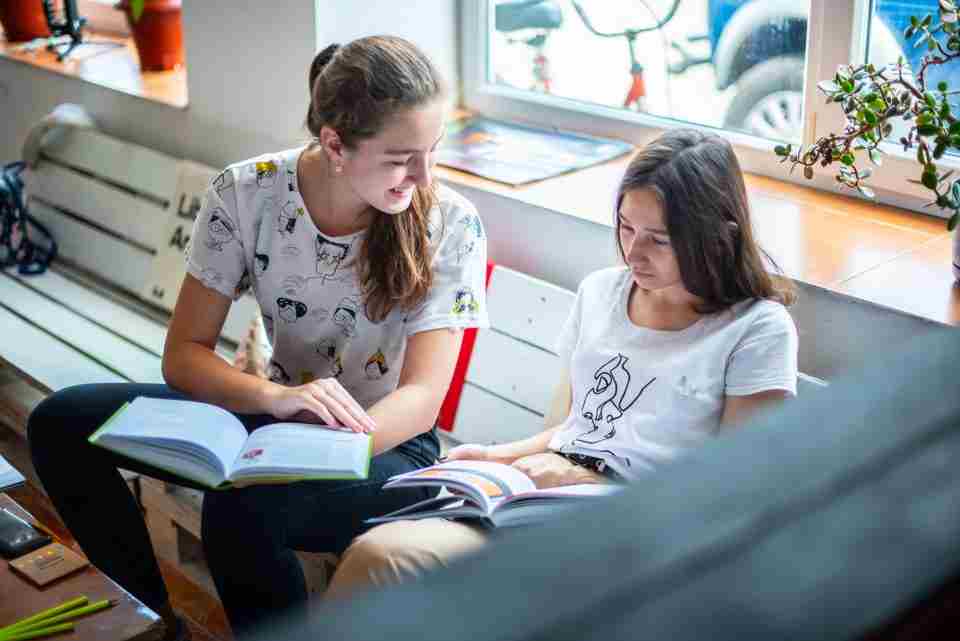 The schoolgirl is not definitely sure if she wants her life in future to be related with science and technologies. She says she also considers medicine, psychology and even art.

I would hate staying at home doing nothing, I like being active, when I get interested and have an opportunity to do something useful for other people. It will be really nice if we succeed in helping someone find their way in life. Perhaps, our age-mates from our home folks will launch a new company like Apple, and we will be telling it’s us who helped it realize it, – smiles Tetiana. 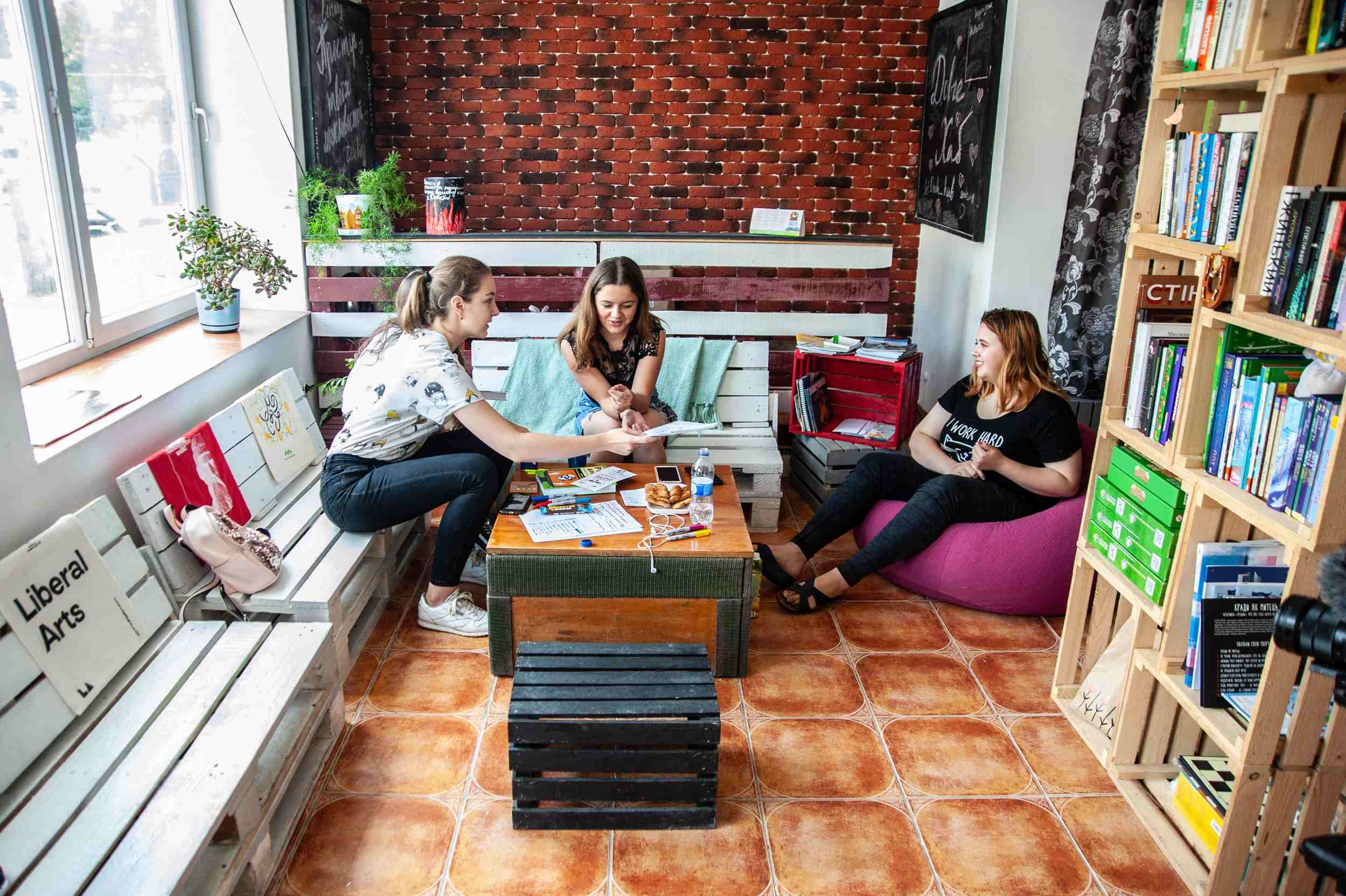 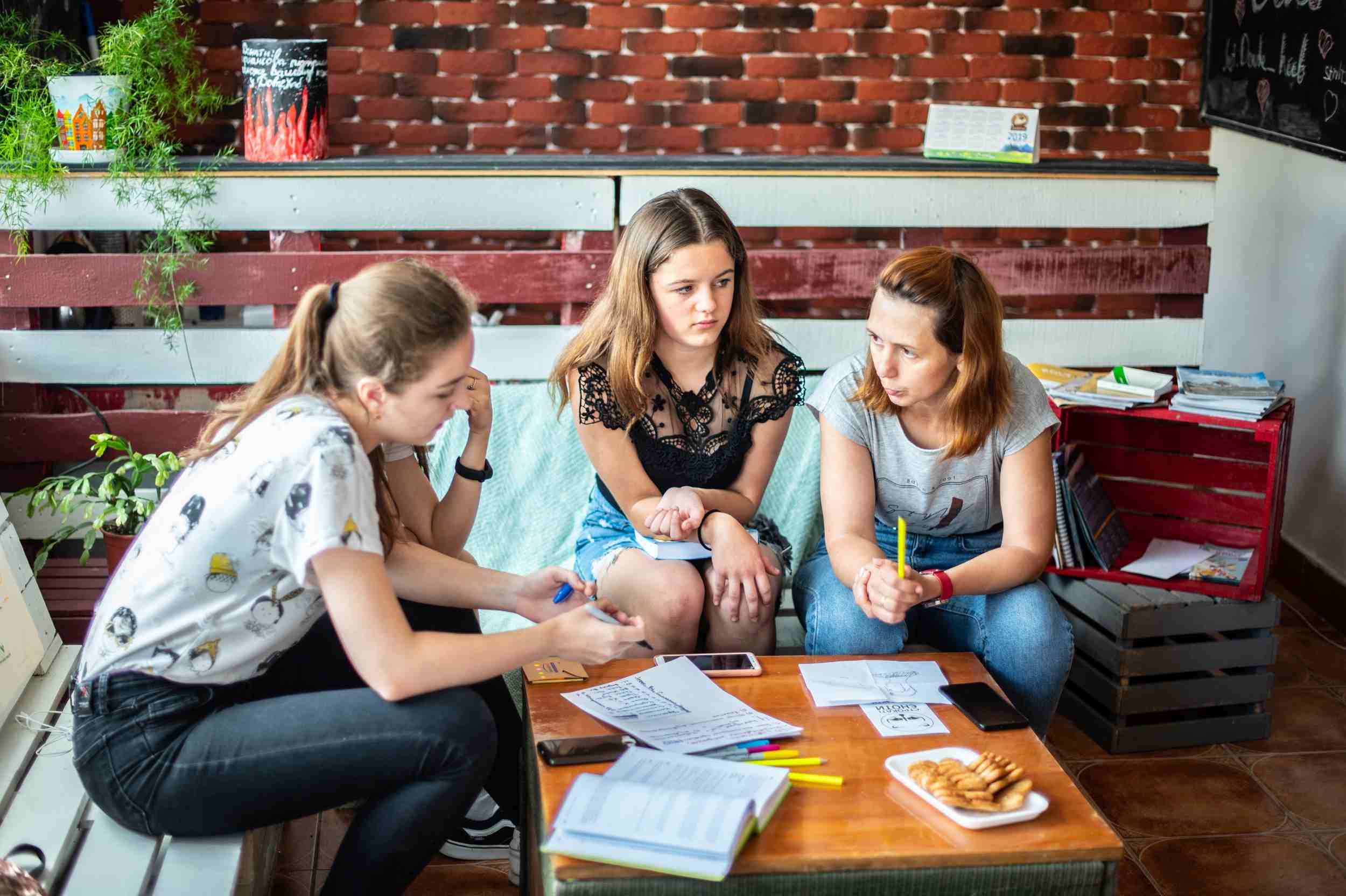 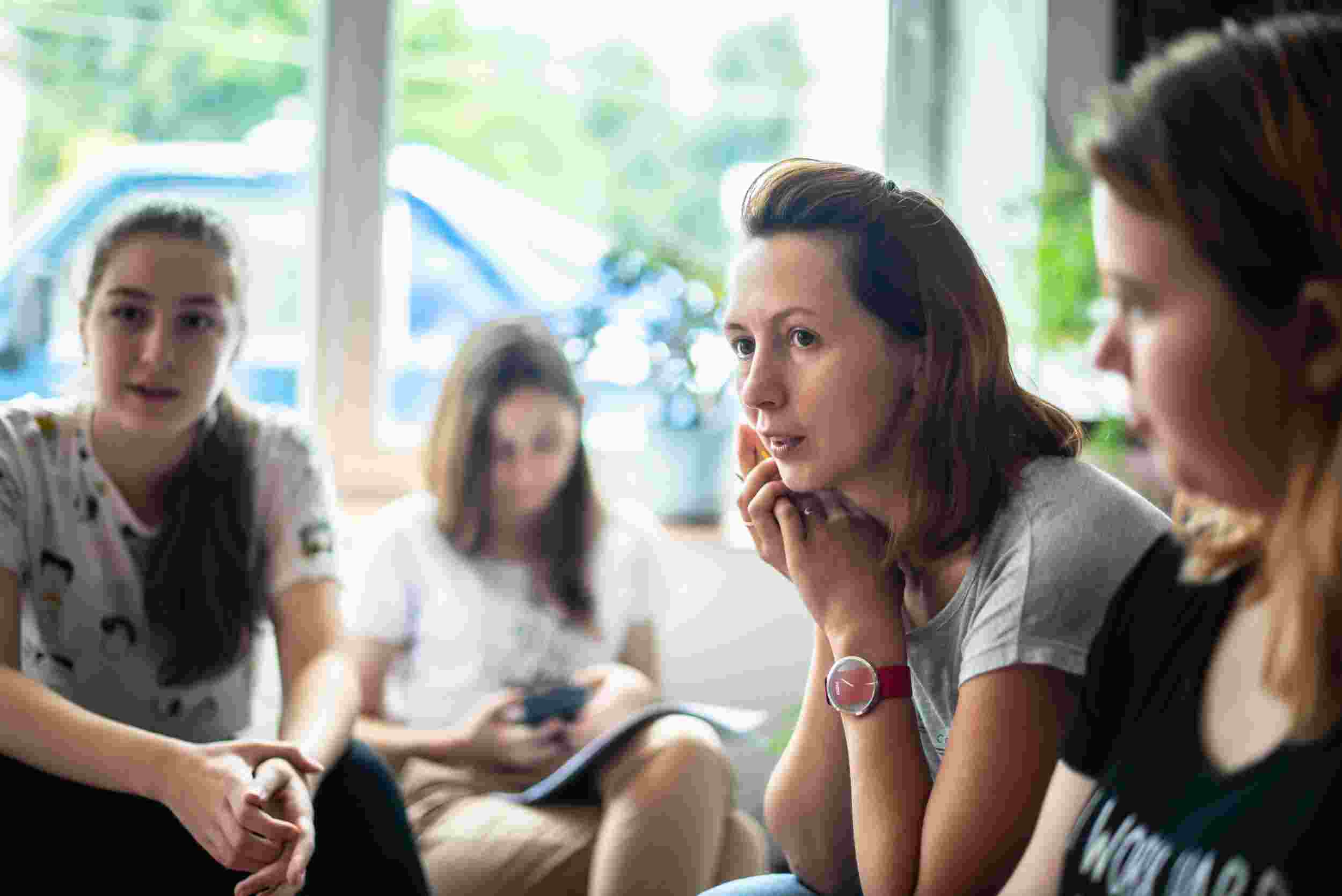 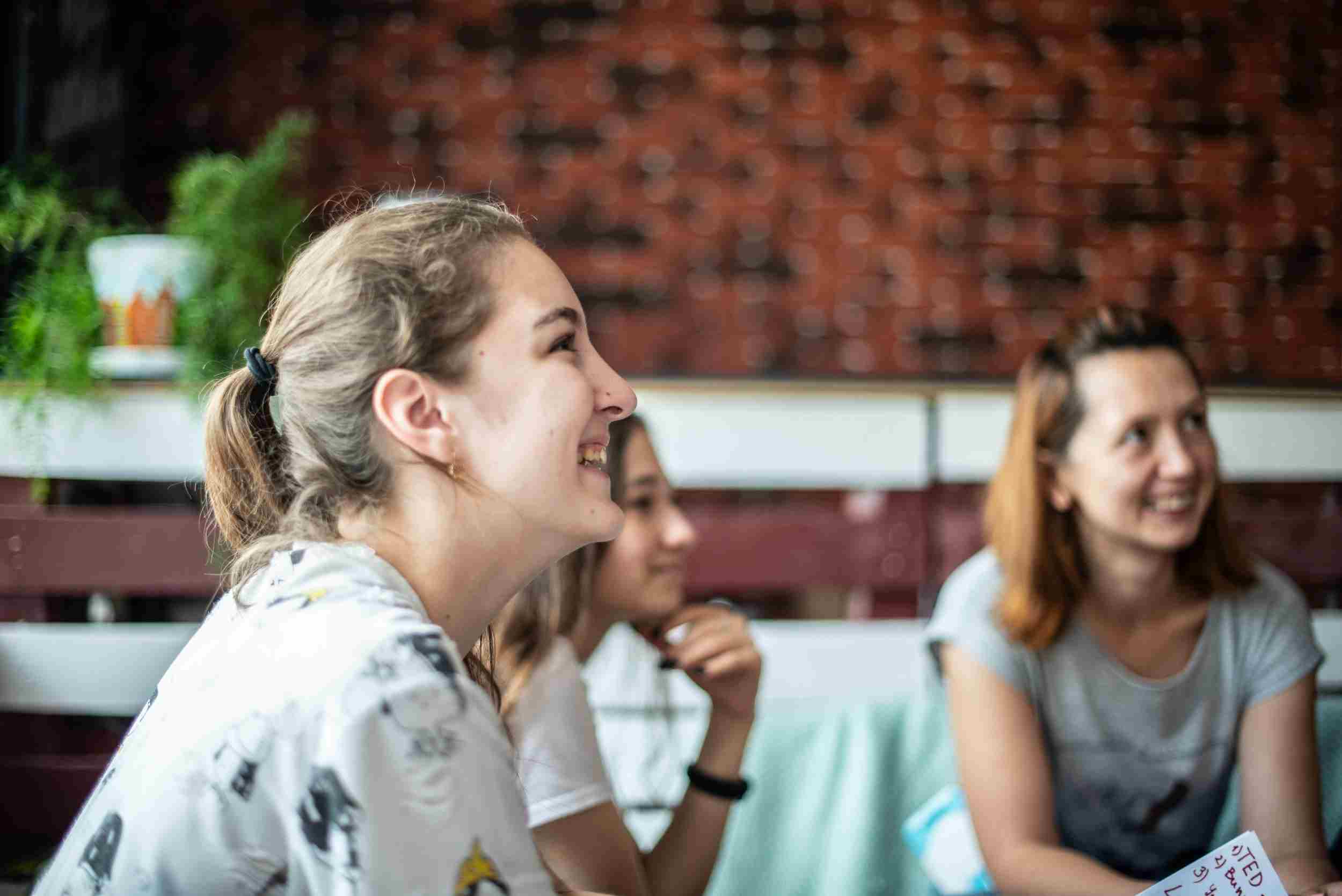 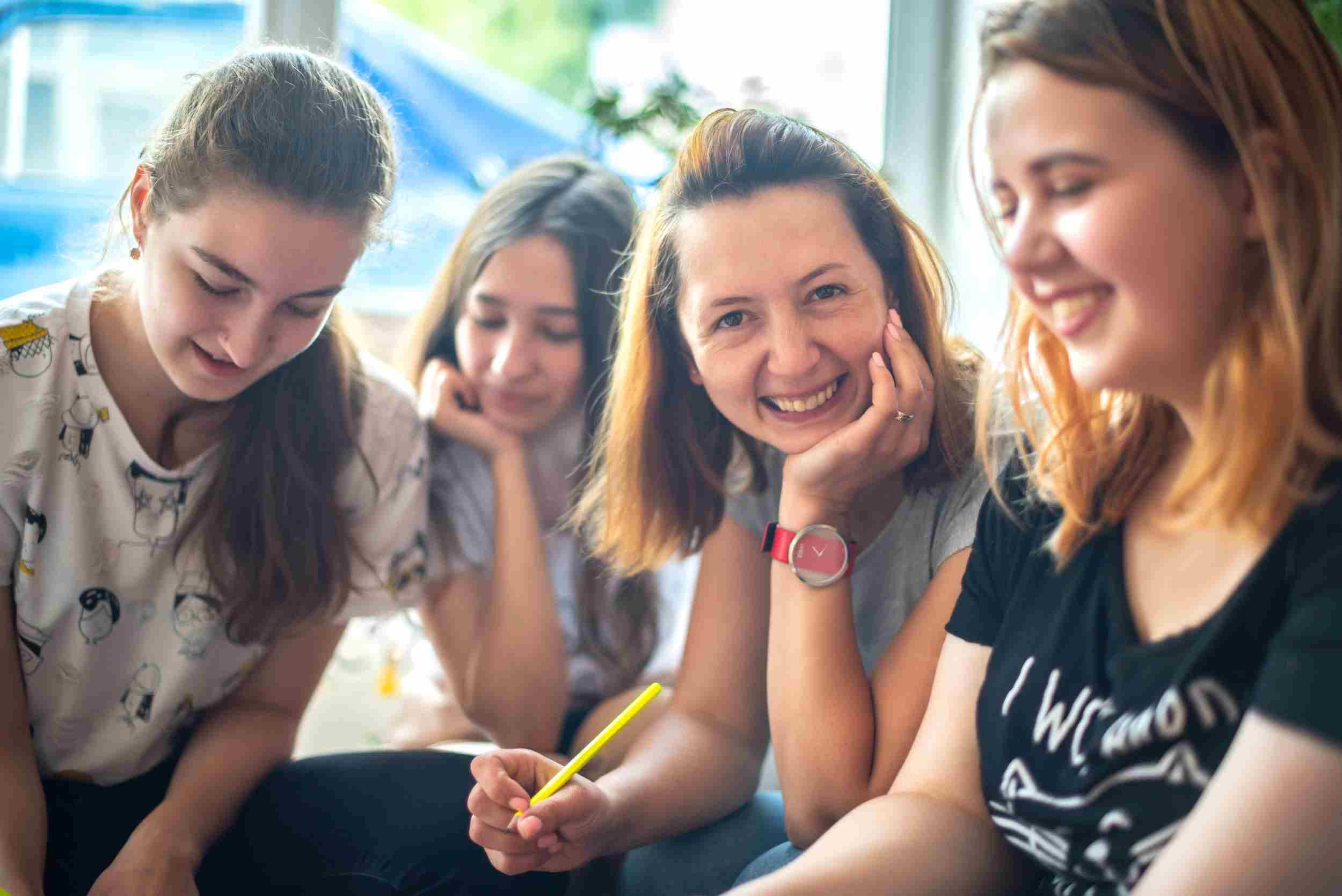 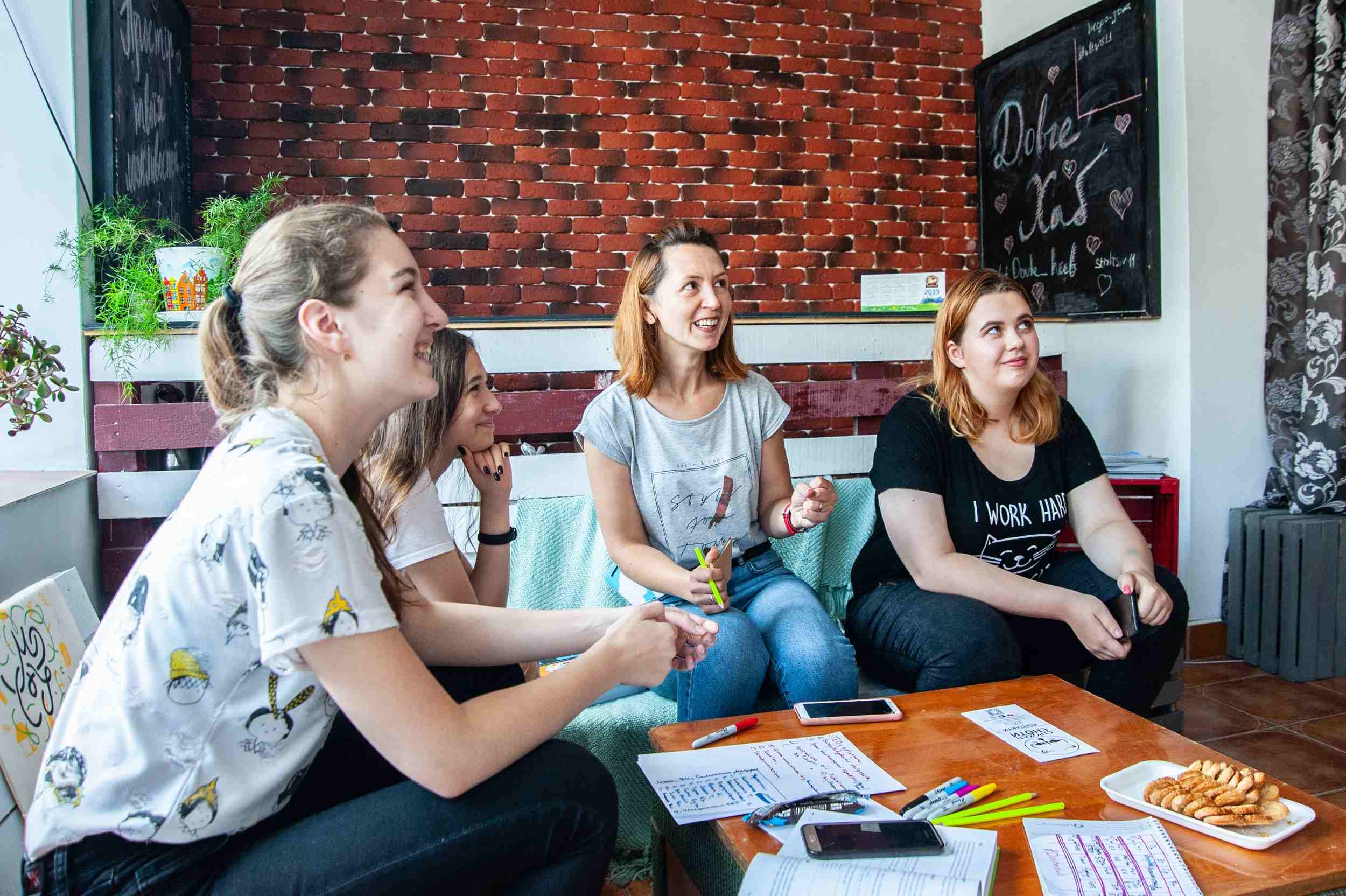 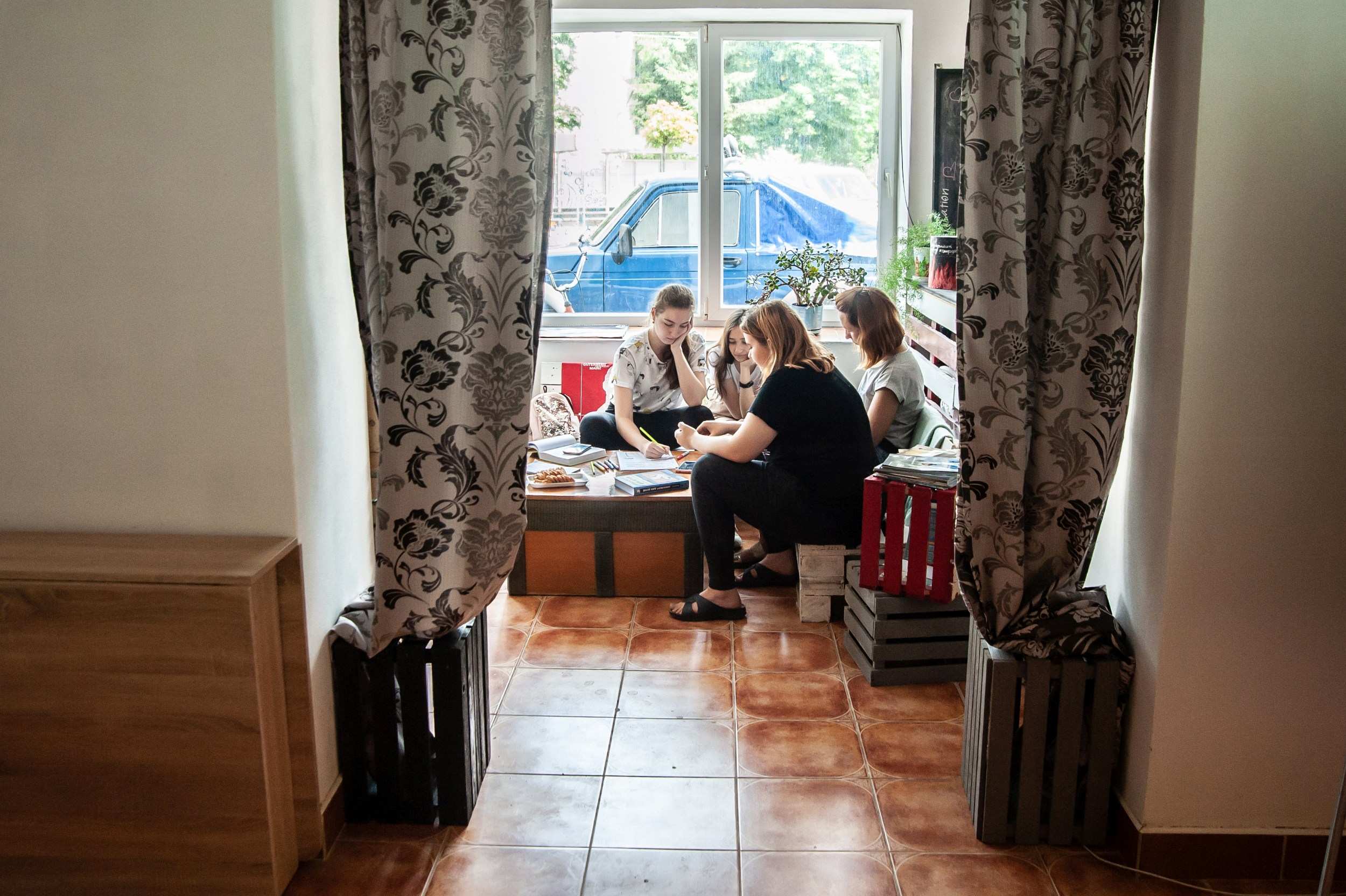 Yulia, in her turn, says that she will pay special attention to programming and computer graphics, for she wants to become a web-designer, while her brother is already a student in Lviv by this profession.

– I do hope that people will get interested here. Even without attending any definite programs in the HUB, you can just come here to do your home assignments, talk to your friends. It is important for me that this is a place opening up opportunities for my friends, age-mates and myself. Although we live in the countryside, we can pump up our skills, advance and reach some goals. Even though you’re from a village, you may become a great personality, – Yulia thinks.

The HUB has been recently visited by the Prime Minister on the issues of European and European Atlantic integration of Ukraine, Ivanna Klympush-Tsyntsadze.

– The built-up of a state dreamed of long before by many generations of Ukrainians, the one we fought for at Maidan Square is going to be a difficult and painstaking process. First of all, a recipe for it is people you can rely on. These people cannot be invited in fair numbers from abroad, punish with repressions or buy at a big price in a recruitment company. They can only be brought up.

Since the very kindergarten period, school and university…A new quality standard for officials will only appear, when we obtain a society with a new set of values and demands. One doesn’t need to be a predictor to realize that this set of values does not allow for behavior like “Bugger it!” it used to be not long ago. Values arise from education. Therefore our common matter is to invest into it as much as possible, even thought we cannot expect to reap the fruits of it any soon.

As I was visiting Transcarpathia, I was pleasantly surprised by the HUB for youths in the village of Dovhe. For many years we gave no alternative to alcohol, rogue songs and the serials like “The In-laws”  for our kids. Today, in this Transcarpathian provincial village I saw a book by Dmytro Kuleba, “”War for reality”. They also have books by Yuval Noy Harrari, by Niall Ferguson and lots of other cool books that could be none the worse to read by those whose duty is to lead us to the brave new world.

It is important that the youths are concerned with the HUB themselves, keeping the watch in turns. They have courses in programming and in foreign languages – Slovak, German and English, of course…Inspired by them!